Review: A Different Kind of Evil 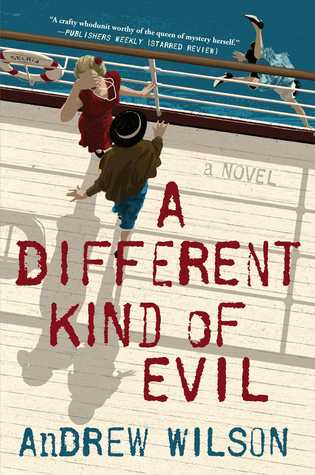 A Different Kind of Evil by Andrew Wilson

Two months after the events of A Talent for Murder, during which Agatha Christie “disappeared,” the famed mystery writer’s remarkable talent for detection has captured the attention of British Special Agent Davison.

Now, at his behest, she is traveling to the beautiful Canary Islands to investigate the strange and gruesome death of Douglas Greene, an agent of the British Secret Intelligence Service. As she embarks on a glamorous cruise ship to her destination, she suddenly hears a scream. Rushing over to the stern of the liner, she witnesses a woman fling herself over the side of the ship to her death.

After this shocking experience, she makes it to the Grand Hotel in a lush valley on the islands. There, she meets a diverse and fascinating cast of characters, including two men who are suspected to be involved in the murder of Douglas Greene: an occultist similar to Aleister Crowley; and the secretary to a prominent scholar, who may also be a Communist spy. But Agatha soon realizes that nothing is what it seems here and she is surprised to learn that the apparent suicide of the young woman on the ocean liner is related to the murder of Douglas Greene. Now she has to unmask a different kind of evil in this sinister and thrilling mystery.

After reading A Talent for Murder, I was eager to get back into the trenches with Mrs. Christie. A Different kind of evil takes place just two months after the end of the first novel. I do recommend you reading it first. You may read this novel as a standalone, but I think it would increase your enjoyment of the story to read this series from the beginning.

Mrs. Christie is working with Special Agent Davidson to solve the murder of his colleague, Douglas Greene, whose death was peculiar. She boards a ship heading to the beautiful Canary Islands, where Greene's body was discovered, only to find that what should be a relaxing experience is anything but relaxing.

Christie is surround by a cast of interesting characters that all seem to be a bit shady at times, not to mention the suicide she witnessed a few days into her trip. Once she gets to the island, things become trickier than she thought it would be. Bodies start piling up, secrets are revealed, and even worse than that, Christie is having a hard time writing her latest novel.

Andrew Wilson has created a wonderful series with one of the most beloved authors of all time. I love that he made the Queen of Mystery a character in a mystery of his own. It kind of makes you wonder where she got all her fantastic ideas for the novels she wrote. This is a great series that mystery lovers will enjoy!