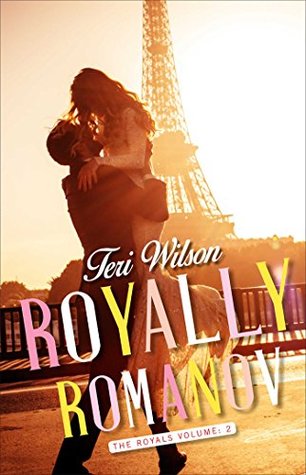 In this charming modern day retelling of the 1956 classic Anastasia, a museum curator falls for a mysterious man who may or may not be a long lost heir to Russia’s imperial Romanov dynasty.

Finley Abbot is organizing the most prestigious art exhibit of her career at the Louvre museum—a retrospective of art from the House of Romanov. But the sudden appearance of Maxim Romanov threatens to turn her into the biggest laughingstock of the art world. When she finds herself falling in love, she realizes there’s even more at stake than her career. How can she trust a man with her whole world when he can’t remember a thing about his past?

After suffering a violent blow to the head, Maxim’s only clue to his identity is a notebook containing carefully researched documentation in his own handwriting indicating that he is the sole surviving descendant of the Grand Duchess Anastasia, previously thought dead in the murder of her family during Russia’s Bolshevik revolution. His struggle to put the mysterious pieces of his past back together leads him to Finley. At first, she’s convinced Maxim is nothing but a con artist. But there’s something undeniably captivating about the beautiful, brooding man who claims to be searching for his identity—something Finley can’t quite bring herself to resist. When he reveals a secret about one of the imperial Fabergé eggs in the collection, she accepts he may actually be telling the truth. But as soon as Finley and Maxim act on their feelings for one another, Maxim is confronted with evidence that calls into question everything he’s begun to believe about himself.

I've been fascinated with the mystery surrounding Anastasia for as long as I can remember. After reading Royally Roma last year, I knew I had to put Royally Romanov on my tbr. And I have to admit that with the upcoming nuptials of Harry and Megan, it put me in the mood for book two or The Royals series.

Maxim wakes up in the hospital with no memory. Well, he remembers bits and pieces, but not the whole picture. He keeps dreaming of a mysterious woman who may be able to help him, but he doesn't even know where to begin to search for her. His only clue to his identity is a notebook where he's written that he is a Romanov--which puzzles him even further.

Finley Abbot is a curator at the Louvre and has been working on an exhibit that features art from the House of Romanov. Maxim's search to uncover his true identity leads him to her. And it turns out she is the woman that he's been dreaming about. Finley is curious but cautious about this man who claims he might be a direct Romanov descendant. If what he claims is true, it could ruin her career. But Finley wants the truth, so she reluctantly agrees to help him.

The chemistry between these two only seems to increase with every meeting. Finley knows he could be a con-artist, but that doesn't deter her. Together, though danger lurks around every corner, they set out to find the truth in this exciting novel about an ancient mystery. Royally Romanov is a fast-paced, highly addictive book that will have you reading past your bedtime and have you dreaming of a prince of your own.