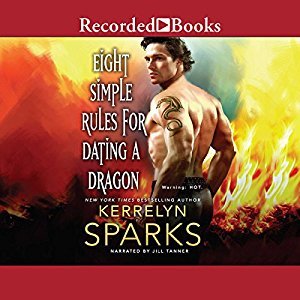 From the brilliant imagination of Kerrelyn Sparks comes a bold new fantasy romance series in which passion and magic collide. Behold the Embraced…

Gwennore has a talent. An Elf able to track down the cause of an illness and heal it, she’s a valuable asset to her people. But when the kidnapping of a young girl thrusts Gwennore into the very heart of the realm of the dragons, she discovers not only a place of power and magic, but also a haunted land, plagued by an ancient curse that all but ensures extinction to the royal family. But when she meets the smoldering General Silas Dravenko, they strike a bargain—save the country from its cursed illness, and he will return the kidnapped girl. She’s been raised never to trust a dragon, but never did making a deal with the devil feel so good…

Silas has no way of curing the family he’s loyally served for years. But when a beautiful elf, long considered the enemy of the dragons, comes bursting into his world, Silas is awakened to passion and desire in a way he’s never felt before. But can he trust a sworn enemy to save the very existence he holds dear? And can their love survive those that threaten to tear them apart?

It's been a long while since I've experienced the wonderful imagination of Kerrelyn Sparks, so when the opportunity to review this audiobook came about, I jumped at it. I've not read any other books in the Embraced series, but one thing I love about this author is that you don't have to read her books in any particular order to enjoy them.

Eight Simple Rules For Dating A Dragon is narrated by Jill Tanner. I think Jill has a wonderful voice for narration, however, I'm not sure she was right for this book. I feel bad for even think this, but her voice just didn't seem to suit this story.

Gwennore is an Elf with the talent for healing. When she's kidnapped along with a young girl, she gets thrust into the middle of a political mess. She strikes a bargain for the release of the young girl with General Silas Dravenko, who needs her help to save his kingdom.

But there's a lot more going on than meets the eye. Is the kingdom cursed? Will Gwennore learn who she really is? Can she save them? Also there's magical trees and dragons. Which any book that contains dragons is cool. And I love that Gwennore calls him Puff.

There were things that I liked about this book and things I didn't. At the beginning of the book Gwennore uses the word ye a lot, but somewhere in the middle she loses it completely. I liked that she spoke in an antiquated way. Another thing that I didn't like is that Silas made sexual innuendos all the time. Yes, I know this is romance, but come on! Sometimes the situation calls for the characters to not be focused on sex.

Overall, it's a good read. It's nice to get away to a magical kingdom and know that the characters will somehow live happily ever after. Eight Simple Rules For Dating A Dragon is the third book in the series. I'm not sure when the fourth book will be available, but it gives me plenty of time to go back and read the first two.

*I received a copy of this audiobook from Recorded Books. While I am appreciative, it in no way influenced my opinion.