Audiobook Review: Not That Bad 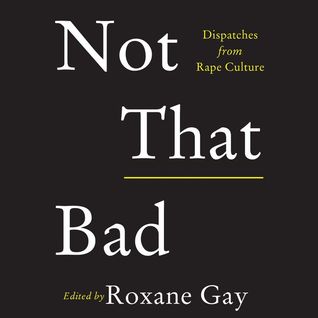 In this valuable and revealing anthology, cultural critic and best-selling author Roxane Gay collects original and previously published pieces that address what it means to live in a world where women have to measure the harassment, violence, and aggression they face, and where they are "routinely second-guessed, blown off, discredited, denigrated, besmirched, belittled, patronized, mocked, shamed, gaslit, insulted, bullied" for speaking out. Contributions include essays from established and up-and-coming writers, performers, and critics, including actors Ally Sheedy and Gabrielle Union and writers Amy Jo Burns, Lyz Lenz, and Claire Schwartz.
Covering a wide range of topics and experiences, from an exploration of the rape epidemic embedded in the refugee crisis to first-person accounts of child molestation, this collection is often deeply personal and is always unflinchingly honest. Like Rebecca Solnit's Men Explain Things to Me, Not That Bad will resonate with every listener, saying "something in totality that we cannot say alone."

Searing and heartbreakingly candid, this provocative collection both reflects the world we live in and offers a call to arms insisting that "not that bad" must no longer be good enough.

I requested Not That Bad as an audiobook for review after listening to the introduction by Roxane Gay. I knew from the brief excerpt that this was going to be a powerful, moving, life-changing book. I listened to the whole audiobook immediately and then had to walk away for a bit. Not because it wasn't all the things I thought it would be, but because it brought up so many emotions that frankly I didn't know how to deal with.

After listening to this book it is my view that this should be required reading for everybody. And I would definitely recommend the audiobook instead of the hardcover or paperback because listening to these pieces narrated by their authors is powerful, hearing their stories in their own voice, hearing the emotions, it will change you.

Not That Bad tackles rape culture in America. Little girls are taught to stick together in groups. In fact, boys often make fun of girls going to the bathroom together. But our mother's have taught us, just like their mothers have taught them, that there is safety in numbers. Safety from what you ask? Safety from people who think it's their right to take what doesn't belong to them. Most women you talk to have a story. Some men have them too. Sexual orientation, economic status, gender identification, taking the bus home after a long day, walking with your kid down the street, etc. doesn't matter. Keep quiet, don't talk, keep moving, don't make eye contact, don't wear a ponytail, don't wear a skirt, and if you don't say no, well that definitely means yes.

The authors in this anthology bravely show the different ways they've been marked by rape culture. And further explains how brainwashed society is in thinking that since you were able to walk away from it, then it's not that bad. Roxane Gay did a wonderful job putting together this book mainly because it represents a wide spectrum of people from different walks of life. Rape culture is a problem. It's a problem cultivated every day by millions of people. It's a power trip. And as long as people don't speak out against it, it will continue.

Not That Bad left me feeling raw. Listening to this collection made me think about how much we're surrounded by rape culture and have, well, learned to live with it. From catcalling, to movies, music, and just general behavior of other people. With the #metoo movement, it's definitely shined a light on it, but I can't help feeling it needs to be more. And books like this will help.