I read the 4th book in the Poldark saga, and the storyline has taken a dark turn. 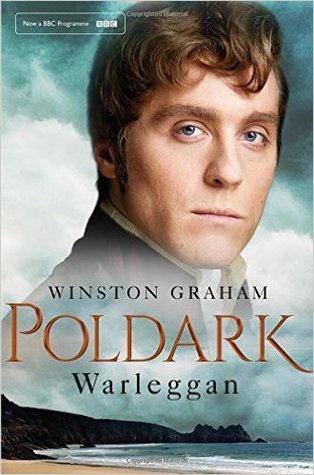 Cornwall, 1792-1793. Ross Poldark plunges into a speculative mining venture which threatens his financial security and his stormy marriage to Demelza. When the old attraction between Ross and Elizabeth begins to rekindle itself, Demelza retaliates by becoming dangerously involved with a Scottish cavalry officer.

I first became aware of Poldark back in 2015, when PBS brought this remarkable series back to the small screen. I, along with many others, became enraptured by the complexities of characters and plot. And it has been my absolute pleasure to read the books that coincide with the series. The first two books in the series, Ross Poldark and Demelza, go along with season one. Books three and four, Jeremy Poldark and Warleggan, go along with season two. The television series follows the book remarkably well. But of course, you get more details with the books and there are a few differences. I won't point them out so as not to spoil the book for anyone who has not read it yet.

Warleggan is the fourth book in the series. And if you've been keeping up you know that George Warleggan has made it his mission in life to see Ross fail, to bring the Poldark name crashing to the ground. And in this book it looks like he succeeds.

Francis and Ross have mended their broken relationship and things begin to look up for the Poldark family. Then in a tragic turn of events, Francis dies, leaving Elizabeth and Charles Jeffrey without a protector. Ross wants to take up that role, but this is dangerous ground since he's never really gotten over his love of Elizabeth. Not to mention George Warleggan sees an opportunity to secure Elizabeth for himself.

Demelza loves her husband, puts her absolute trust in him, but his relationship with Elizabeth has always been a sore spot. She flirts with a charming Scottish officer, I believe, in order to get Ross to notice her. Because for all his heroic qualities, Ross is an idiot when it comes to his relationship with Demelza. Then Ross commits an unforgivable act that hurts both Elizabeth and Demelza, and it forever drives a wedge between himself and Demelza. In retaliation, she ups her flirting game with the officer, and well, you'll have to read the book to find out what happens.

Meanwhile there are smugglers, parties, Caroline and Dr. Enys get a little more serious, trouble in the mines, success in the mines, and George Warleggan always making trouble for the Poldarks. One of the things that I love about these books are the characters are remarkable human. Meaning they aren't completely good and they aren't completely evil. They make tragic mistakes. They are driven by desire and emotion as well as logic and reasoning.

This really is an extraordinary series. And I'm so glad PBS does it justice. This is a series I highly recommend. There's a total of twelve books, and so far I've only read four. It makes me wonder what other catastrophes Winston Graham has in store for the Poldarks.