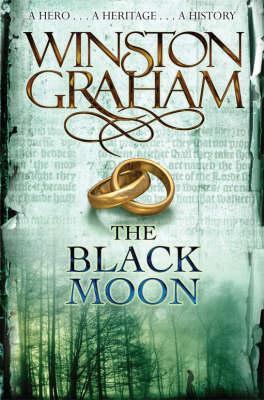 Cornwall 1794. The birth of a son to Elizabeth and George Warleggan serves only to accentuate the rift between the Poldark and Warleggan families. And when Morwenna Chynoweth, now governess to Elizabeth's eldest son, grows to love Drake Carne, Demelza's brother, the enduring rivalry between George and Ross finds a new focus for bitter enmity and conflict.

There are no spoilers for The Black Moon in this review, however, it's the fifth book in the series, so spoilers for the previous books cannot be helped.

I struggled with whether or not I would continue reading this series after the shocking actions of Ross Poldark in Warleggan. I am a fan of the television series, so I knew about Ross and Elizabeth's night of angry, passionate, consensual sex. The book, however, was different. It was rape. The actions of the supposed hero of the book left me disenchanted. I gave the book a favorable review because overall, the story is outstanding. Winston Graham has written a compelling story with fantastic characters. So in the end, I decided to continue with the series.

There's an author's note in The Black Moon that states Graham had only ever intended to write four books in the Poldark saga. He felt that their story was complete. It wasn't until years later that he decided to pick up where he left off. He cautions to not expect it to "solve everything, or tie up loose ends or to leave no new ones trailing. That isn't the way it happened at all." It was after reading the note that made me realize that in real life, justice isn't always swift, situations aren't always black and white, but a whole lot of grey.

The Black Moon, while continuing the Poldark story, focuses on other characters in the Poldark circle. Demelza's brothers Drake and Sam Carne come to work at the mine and around Nampara. Drake meets Geoffrey Charles and forms a fast, but forbidden, friendship. Drake is taken with Morwenna Chynoweth, Elizabeth's cousin and Geoffrey Charles' governess. You know their relationship is doomed because he is what they considered 'low born' and she, while penniless, has noble blood. Yet, I still yearn for them to find a way to be together. Demelza and Verity are my favorite characters by far. Demelza continues to be a pillar of strength for the Poldark family, as does Verity.

Geoffrey Charles is growing more defiant of George Warleggan daily, and it's hilarious. Dwight, now in the Navy, has been taken prisoner in France. His engagement to Caroline Penvenen is still kept secret from the majority of society. She spends most of the book yearning for news of Dwight. Elizabeth and Demelza both have a baby. And there's a possibility that Ross could also be the father of Elizabeth's son. Maybe we'll find out in the next book. George Warleggan is still George Warleggan. His character has been completely static throughout the whole series. Finally, Ross once more proves to be the hero he is capable of being. If only he can be the hero in his intimate relationships as well.

I'm happy Winston Graham decided to continue with this series. The characters are growing and changing, except George Warleggan, as well as the community in which they belong. The storyline continues to keep me captivated as events unfold. There are twelve books in this series, and I'm barely halfway through it. It's a long journey to undertake with such flawed characters, but I think I'm in it for the long haul.