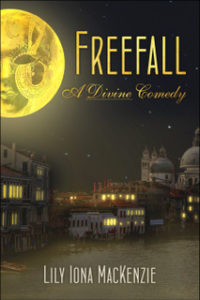 During a four-day reunion in Whistler, B.C., Tillie Bloom, a wacky installation artist, reconnects with three women she had hung out with in the late ’50s and early ’60s. While in Whistler, secrets surface and a near death experience occurs during a hike, both of which bind the women at a deeper level.

Their new intimacy prompts them to celebrate the millennium as well as their approaching sixtieth birthdays in Italy. So a few weeks later, Tillie travels to Venice to have an extended reunion with her friends. While the women assume they’re in Venice to vacation and deepen their relationships, Tillie has a hidden agenda: she intends to crash the Venice Biennale, hoping to find a larger audience for her art. Cupid’s arrows complicate her goals when she and an Italian priest fall for each other.

The reflective quality of Venice’s canals also create unexpected changes in the women, causing them to turn inward. They all end up with a fresh take on themselves and their lives. Tillie, in particular, experiences a deeper understanding of herself. But will it take her on a path she’s ready to travel, and will Venice finally give her the recognition she seeks as an artist?

“Hilarious, spiritual, and sensual, Freefall: A Divine Comedy takes you on a rollicking ride spanning three countries and four decades. These fascinating characters will fill your imagination, defying expectations about aging, art, and what truly matters in life.” —Laurie Ann Doyle, author of World Gone Missing

“This is an enchanting story about old friends reuniting as they struggle with thoughts on aging, religion, motherhood, men, art, and death. A delightful trip in every respect, with plenty of surprises and laughs along the way. A Divine Comedy, indeed!” —Mark Willen, author of Hawke’s Point and Hawke’s Return

Tillie is an installation artist who dropped out of high school. She is approaching her 60th birthday. She wants to see her 3 friends she used to hang out with in the 50-70’s. Her friend Daddy just gets released from jail and the two of them meet up. Daddy had plastic surgery so her nose would look like Zsa Zsa Gabor (if you’re old enough, you may remember her from the TV show Green Acres). Daddy is also a real-estate agent. The two of them take a road trip in Tallies 1960’s VW Microbus to Whistler, British Columbia in Western Canada. Now, it is a posh ski resort that caters to tourists but back when Tillie was there last, it was old beat-up houses and farms.
They arrive at their friend Sybil’s who is a chain-smoking bookkeeper and puzzle addict and seems to be tipsy on wine already. Their friend Moll is also there. She is a housewife and mother of three and loves the great outdoors. As the evening progresses they talk about their lives thus far. They also make plans to meet up in Venice where Sybil has a small property. They want to celebrate their 60th birthdays together. Tillie doesn’t revel this to her friends but she also wants to go to Venice to try to get into a famous art exhibition.
As we read on, Venice becomes another central character of the novel. Lily Iona Mackenzie really captures Venice as the backdrop and brings it to the front with the four women. This book could be categorized as women’s fiction because it will appeal mostly to women but that would be selling it short. It certainly has literary merit, full of magical realism. It is also about our own mortality and of course, art. I don’t usually enjoy magical realism, but I did enjoy it in Freefall. It was so nuanced and was needed to get the author’s point of view across. This book has great depth and well-written quirky characters. If you enjoy literary fiction you are in for a treat. I give it 5 stars.

I visited Venice for the first time in 1994, and it was love at first sight. It reinforced my notion that our ego consciousness is surrounded by the waters of the unconscious. I had found a city that demonstrated this perspective. Daily life goes on while the city’s structural foundations are rooted deep in the Venetian lagoon, just as our ego, our conscious perception of ourselves, floats on the collection unconscious, the inner sea that surrounds us.
Not only do automobiles not have a role in this metropolis, but boats are the major form of transportation. And what a difference that makes! The steady hum of car motors growling and horns honking and tires squealing on concrete that permeate most aspects of city life don’t happen in Venice. It’s also very different to navigate on water instead of land. Instead of dodging cars that speed dangerously on freeways crisscrossing our American cities, Venetian inhabitants move at a much more leisurely pace, night and day. There’s something comforting about the waters’ rising and falling when we’re navigating the lagoon on boats. They create a rocking motion, not unlike what we experienced as infants in our parents’ arms or in a cradle. How could that movement not be restorative?
But what does this have to do with how my four major female characters end up in Venice for the last two thirds of my novel Freefall: A Divine Comedy? And why does that city make a good setting for a novel?
Venice is magical, and magical realism has played a major role in all of my published novels. The term magic implies some slight of hand, an ability to make things appear and disappear at will. In a magic show, magicians exercise their ability to draw viewers’ attention away from what the magicians are doing so they can convince those watching that a rabbit really does appear at random out of an empty hat, or that any number of equally fantastic events can occur. In this case, the magic isn’t really magical in the sense of a supernatural intervention because there’s a trick at its foundation based on perception and how skillful the magician is at keeping the audience distracted enough not to notice the hoax involved.
Something similar happens with writers. They capture our attention through assembling strings of words that become a compelling narrative we follow. Just as a viewer at a magic show sets aside his/her momentary doubts about what’s happening before his/her eyes, so too do readers enter the narrative dream. That enables the writer to convince readers that the setting, characters, and events taking place are actually happening in real time when, in truth, they aren’t. They only come to life in the readers’ imagination as readers let go of their immediate world to undertake this journey into the unknown. Put this way, reading can seem like a potentially dangerous experience, and it can be if a writer’s ideas and images shatter some preconceived notion about our world and about us.
Magic also has the ability to temporarily take people out of the constraints of everyday life and make them feel they can transcend it. Instead of being locked inside the usual routines that structure our days, we find release when something magical happens, such as when we watch a play in a theatre and suddenly our world is transformed. We’re no longer our daily selves, but we begin to identify with what’s occurring on the stage and participate in all of the characters involved, good guys and bad guys.
Any writing, whether it’s a novel or a play, has a magical component to it. The primary storytelling goal is magic, achieved by mysterious means. Words themselves are transformative in that they can so easily metamorphose into other words: world contains word and old. Add or subtract a letter here or there and we’ve landed in a different meaning. Words in themselves are slippery and magical, calling forth images just by naming things: red chair, oak table, 2006 Honda Accord, green plaid coat, eucalyptus tree. Read the text and suddenly something appears in our mind’s eye. Amazing!
This, then, seems to be the foundation for what we call magic realism. Language by its very nature is magical, transforming our everyday reality in multiple ways, carrying us aloft on the wings of thought. The writer confronts reality and tries to untangle it, to discover what is mysterious in things, in life, in human acts. The principle thing is not the creation of imaginary beings or worlds but the discovery of the mysterious relationship between our circumstances and us. The magical realist does not try to copy the surrounding reality but to seize the mystery that breathes behind things.
And that’s what I’ve attempted in Freefall. While the four major character’s lives are rooted in the “real,” however we may define that state, they also participate in the world of imagination where things can happen outside of our usual perspectives. This is why Venice was such an important setting for my novel. These women, all facing their sixtieth birthdays, need to be shaken out of their usual routines so they can be open to new possibilities. The dreamy quality of Venice is an ideal place for such a transformation to occur.
Of course, it also hosts the Venice Biennale, and that major art extravaganza gives the major character Tillie, an artist, an opportunity to make her “mark” in the art world (and that has nothing to do with Venice’s St. Mark’s square!). But then you’ll need to read the book to discover for yourself the role that Venice, Italy, and Whistler, B.C., play in this book. 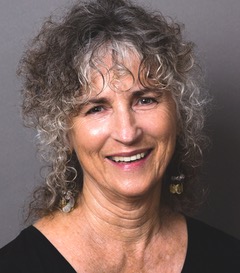 A Canadian by birth, Lily Iona MacKenzie has published reviews, interviews, short fiction, poetry, travel pieces, essays, and memoir in over 155 venues. Her poetry collection All This was published in 2011. Fling!, her debut novel, was published in July 2015. Curva Peligrosa, another novel, was released in September 2017.

Currently, she teaches creative writing at the University of San Francisco’s Fromm Institute of Lifelong Learning. She also blogs about writing and reading.

Not Available Yet.  Expected publication date is January 1, 2019

This giveaway is for the choice of a print copy or ebook for three winners. Print is open to Canada and the U.S. only.  ebook is open worldwide.  This giveaway ends on November 30th at midnight pacific time.  Entries are accepted via Rafflecopter only.

Marcie To Read, or Not To Read Oct 16 Guest Review, Guest Post,  & Giveaway 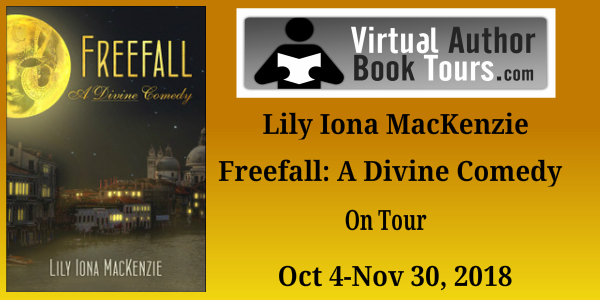