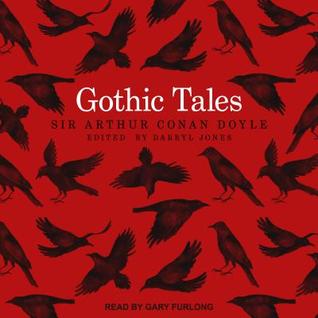 Arthur Conan Doyle was the greatest genre writer Britain has ever produced. Throughout a long writing career, he drew on his own medical background, his travels, and his increasing interest in spiritualism and the occult to produce a spectacular array of Gothic tales. Many of Doyle's writings are recognized as the very greatest tales of terror. They range from hauntings in the polar wasteland to evil surgeons and malevolent jungle landscapes. This collection brings together over thirty of Conan Doyle's best Gothic tales. Darryl Jones's introduction discusses the contradictions in Conan Doyle's very public life-as a medical doctor who became obsessed with the spirit world, or a British imperialist drawn to support Irish Home Rule-and shows the ways in which these found articulation in that most anxious of all literary forms, the Gothic.

*I received a mp3 of this book courtesy of Tantor Audio for review purposes. However, I own the hardcover book. While I am grateful to Tantor Audio for the opportunity to review this audiobook, it in no way influenced my review.

Sir Arthur Conan Doyle is known best for his Sherlock Holmes stories. I, for one, am a big fan of the books and the television series. This past year I read another book, Conan Doyle For The Defense, which piqued my interest and made me want to read more of his work. I purchased a copy of Gothic Tales and around the same time was offered a review copy of the audiobook. I, of course, accepted, and here we are.

Gothic Tales is narrated by Gary Furlong. He is a wonderful narrator. There are a multitude of characters and accents that he performs so well. He made each story's voice unique and interesting. He has quite a few credits to his name on audible, so I expect others have recognized his talent as well.

This book is quite lengthy. The audiobook is a little over 19 hours long. It took me about a month and a half to complete. However, I didn't listen to this book exclusively at the time. While this book was interesting, it wasn't thrilling. After listening to the introduction, I could see how Doyle's personal life heavily influenced his literary writings. This book deals with things you'd expect in a Gothic novel such as haunting, the unknown, the undiscovered, but also mental illness, his travels, and medical mysteries.  Doyle was also heavily influenced by spiritualism, which also influences his works.

These stories were published in the 1800s and with that comes some negative aspects. There are many stories that contain racism and slurs. Although Doyle was an abolitionist, I still cringed when hearing certain words read out loud. But I wonder if like Mark Twain his purpose was to make people see how ridiculous their prejudices were. Nevertheless, it still made me uncomfortable.

Overall, the collection of stories does open up a window into the author's soul. You get the impression of how much his father's mental illness weighed upon his mind. How his travels at sea fueled his imagination. How his love of spiritualism made him wonder 'what if'. I don't think these tales would fit into the modern interpretation of Gothic, but I'm glad to have widened my Conan Doyle horizon by reading/listening to them.