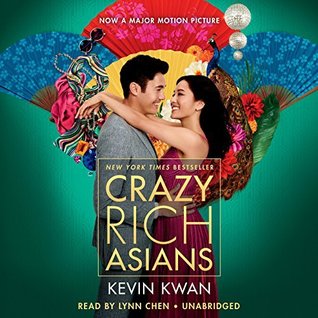 Crazy Rich Asians is the outrageously funny debut novel about three super-rich, pedigreed Chinese families and the gossip, backbiting, and scheming that occurs when the heir to one of the most massive fortunes in Asia brings home his ABC (American-born Chinese) girlfriend to the wedding of the season.
When Rachel Chu agrees to spend the summer in Singapore with her boyfriend, Nicholas Young, she envisions a humble family home, long drives to explore the island, and quality time with the man she might one day marry. What she doesn't know is that Nick's family home happens to look like a palace, that she'll ride in more private planes than cars, and that with one of Asia's most eligible bachelors on her arm, Rachel might as well have a target on her back. Initiated into a world of dynastic splendor beyond imagination, Rachel meets Astrid, the It Girl of Singapore society; Eddie, whose family practically lives in the pages of the Hong Kong socialite magazines; and Eleanor, Nick's formidable mother, a woman who has very strong feelings about who her son should--and should not--marry. Uproarious, addictive, and filled with jaw-dropping opulence, Crazy Rich Asians is an insider's look at the Asian JetSet; a perfect depiction of the clash between old money and new money; between Overseas Chinese and Mainland Chinese; and a fabulous novel about what it means to be young, in love, and gloriously, crazily rich.

Crazy Rich Asians was one of my favorite books of 2018, even though it was published in 2013. I had heard buzz that it was fantastic and so I bought it through audible and there it sat in my queue waiting to be listened to. Then, the news that it was being made into a movie came about, and I decided to wait until the movie was released before I read the book. Except things never go as planned because life. Despite my disappointment of not seeing the movie in theaters, I decided to go ahead and listen to the audiobook, which, in my opinion, was pretty fantastic.

The audiobook is narrated by Lynn Chen. Lynn Chen is an actress on stage and on film. I was unfamiliar with her work before starting this audiobook, but it didn't take me long to discover she was the perfect choice. She voices a multitude of characters and accents and does so with gusto. My only complaint is that I didn't love her Australian accent. It needed a little work. Other than that, she's great. Though the audiobook is almost fourteen hours in length, it didn't feel that long.

The story line to Crazy Rich Asians is fantastic. It covers the complexities of families, class distinctions, society, and expectations. At the heart of the story is Rachel Chu and Nicholas Young. Two young lovers, who want nothing more than to be together. However, Nicholas has been keeping Rachel in the dark about his background. He is crazy rich. The kind of rich you can't even relate to because nothing in your life can compare. The kind of rich where people judge you on the designer you are wearing rather than the kind of person you are. The kind of rich where even if you are rich, whether you are old money or new money matters.

The opulence of wealth in this novel is crazy. But you fall in love with the characters nevertheless. Nicholas brings Rachel home to meet his family without preparing her at all for what she's about to do. Thus, I was angry at Nicholas for some time during the first half of this book. I mean, he should have told her. Anyway, his family views her as a gold digger and strives to tear them apart. Rachel has to decide whether or not Nicholas is worth all the trouble.

This book is a roller coaster of emotion. From laugh out loud to tears, it doesn't disappoint. I adored this novel. Kevin Kwan is a brilliant writer. His characters have layers upon layers. It was so easy to fall in love with this story and its characters. I plan to listen to the rest of the trilogy as audiobooks as well. I highly recommend this book.