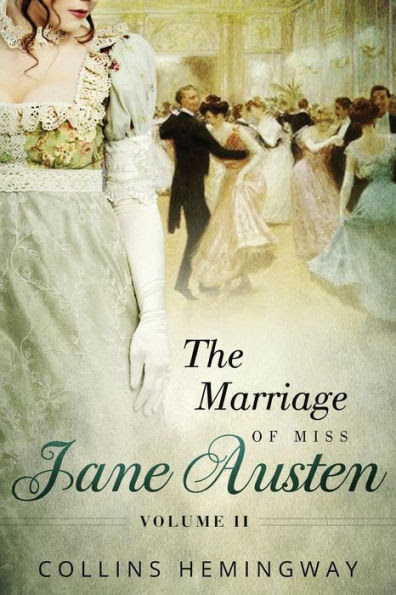 Jane Austen Lived a Quiet, Single Life-Or Did She?

Tradition holds that Jane Austen lived a proper, contemplative, unmarried life. But what if she wed a man as passionate and intelligent as she-and the marriage remained secret for 200 years?

The Marriage of Miss Jane Austen resolves the biggest mystery of Austen's life-the "lost years" of her twenties-of which historians know virtually nothing.

• Why the enduring rumors of a lost love or tragic affair?

• Why, afterward, did the vivacious Austen prematurely put on "the cap of middle age" and close off any thoughts of finding love?

• Why, after her death, did her beloved sister destroy her letters and journals?

The Marriage of Miss Jane Austen trilogy answers these questions through a riveting love affair based on the history of the times and the details of Austen's own life.

I read The Marriage of Miss Jane Austen: Volume I in December of 2018. I absolutely adored it. Hemingway could have stopped with just that one volume. Volume One ended well. It ended as Austen novels usually do, with a happily ever after sort of feeling. So why go further? I guess he knew that his readers would want more. Because there's always more to the story. Life doesn't stop after the wedding. That's where life becomes interesting and complicated. I'm so glad Hemingway decided to take his readers on this journey.

Volume Two picks up after Jane and Ashton's honeymoon. Jane is blissfully happy as the new Mrs. Dennis. However, she has a little trouble navigating the waters as the new mistress of the house. Her mother-in-law still isn't happy about being usurped in Ashton's life, and isn't very helpful to Jane. Jane will not be kept down and rises to every challenge. Jane and Ashton also face challenges dealing with many of the social issues of the day. And if all that is not enough, Jane is expecting a baby. I think the biggest conflict Jane faces is within her self. She struggles with wanting to write as well as wanting to be everything Ashton needs.

The Marriage of Miss Jane Austen: Volume Two is a wonderful sequel to the first novel. It goes beyond the happily ever after into the struggles of newlywed life. Jane is often faced with many advercities that many women face not only in Austen's time, but also today. I so want Jane to live happily ever after, but sadly I know how her story ends. Still, I highly anticipate as well as dread Volume Three. I feel Hemingway will break my heart. Nevertheless, I will read it.

This is a great series that Austen fans will love. Hemingway has written a compelling novel in three volumes that will suck the reader in from the first few pages. And, like me, you will have a hard time letting go until you've read the last page.

Stepping back 200 years, what we see in Jane Austen’s personal life are tantalizing hints of relationships but primarily obfuscation about any possible romances from 1802, when she was 26, until her retirement to Chawton Cottage with the other Austen women in 1809.

Jane had one boyfriend, Tom Lefroy (1795), who was either sent off in disgrace for leading her on—or merely left to study law in London. She shooed away two potential suitors, the clergymen Samuel Blackall (1798) and Edward Bridges (1805).

She had a mysterious beach suitor (1801) who evidently died, though her sister Cassandra spread more confusion than information about that circumstance. Jane also had one “official” engagement to Harris Bigg-Wither, when (the story is) she accepted a proposal from the young man, recanted it overnight, and fled back to her parents in Bath. That event, however, is not recorded until nearly 70 years later by a niece who was not even alive when it supposedly occurred in 1802! And whose mother’s diaries made no mention of this scandalous action. …

Why the smokescreens originating with her family but all pointing to the same idea: a lost love or tragic affair? Why did her beloved sister Cass destroy almost all of the letters from this period, leaving huge gaps in the timeline? Why did the vivacious Jane prematurely “put on the garb of middle age,” as her niece described it, and retire to her writing desk? There at Chawton, she wrote or heavily revised the six mature novels that made her reputation.

By the time Austen’s family responded to her growing fame, they were now in the middle of the repressed Victorian era in which Britannia and propriety ruled the waves. Her nieces and nephews were happy to bury any suggestion that Austen would have ever done anything untoward such as write to make a living or—fall in love. In contrast, Virginia Woolf, writing a generation later, says that “Persuasion” proves that Austen had loved intensely and by 1817 no longer cared who knew.
One does not have to be a conspiracy theorist to envision the possibility that there may have been a very serious relationship overlooked or even hidden by her prim and proper descendants.

This possibility has led me on a ten-year research project and more than four years of hard writing, culminating in the three volumes of historical fiction, “The Marriage of Miss Jane Austen.”
What if Jane Austen had married? What if this intelligent woman of character and passion (read her surviving letters) had met someone very much her equal but also the sort of man a Victorian might want to lose in the mists of time? What kind of man might that be?

How would their relationship have begun? (Might bits and pieces of the recounted history be true?) How would it have developed? How would it have ended? How, as a married woman, might she have fit into the large and turbulent world of the Regency? Perhaps most important, how would the archetypal woman of the period have handled all that marriage meant for a woman of that day?

These are the questions I sought to answer. Though this project began as plausible speculation, the biographical pieces fit into the puzzle much more tightly than I would have imagined. Every time I needed there to be a blank in her history to describe a possible action—there was a blank. Every time there was a documented personal or historical incident—it fell exactly where it needed to in my narrative to continue the story. The more this happened, the more I wondered what was real and what was imagined.

Envision the coolest aviation event in Bath history on exactly the date needed to launch the series (and set up the quasi-mythic proposal a few months later). Envision the most important political issue of the day falling directly into the marriage years, propelling the story onward. Envision the tragic family events of October 1808, when Jane’s sister-in-law Elizabeth dies shortly after childbirth, fitting to the day into the most significant geopolitical actions of that same year. Though I was writing fiction, at times I felt as though I were filling in a few personal details in an already documented history of England.

In addition to “inventing a good story and telling it well”—Fielding’s dictum for a novelist—I wanted to be true to Austen herself: her intelligence, compassion, and humor. I wanted to see her directly engaged in serious issues and to see how she herself might have directly written about serious issues if women writers of the day had been able to. In her novels, she had to treat the most serious issues discreetly, in the background or on the periphery.

This led to the creation of a trilogy spanning these seven years of 1802-1809: Volume I, a non-Austenian courtship novel told with what the author hopes is Austenian charm; Volume II, a deep psychological portrait of a woman’s first year of marriage; finally, the soon-to-be-released Volume III, in which Austen must face the most difficult moral decisions that any person can face.

My hope is that readers will come away satisfied with a tale of a meaningful relationship built upon the “understanding” she often writes about. And why Austen herself wrote at the very end of this period, 27 December 1808: “I consider everybody as having a right to marry once in their Lives for Love.”

Praise for The Marriage of Miss Jane Austen Series

"A skillful portrayal of an early nineteenth-century literary icon takes this historical romance on an imaginative journey of the soul. … The adventure of a true romantic partnership and all the excitement that the nineteenth century had to offer. … [The] novel invites you to linger, to savor, and to enjoy. … Makes for wonderful reading. … A Jane that lives and breathes on the page."—Claire Foster, Foreword Reviews, 4 stars

"Hemingway captures the energy of the times, while also writing with the irony and sly humor of Austen herself. … A strikingly real Jane Austen fully engaged in the turbulent times. … She is a living, breathing presence. … [He] displays a notable ability to recreate time and place. … A lively, compelling read, [a] sobering but moving conclusion." —Blueink Starred Review

"An enjoyable novel in an imaginative, well-researched series. … A well-researched work of historical fiction … [with] sweet moments and intriguing historical insights. … An incredibly moving portrait of a woman facing loss and love." —Kirkus Reviews 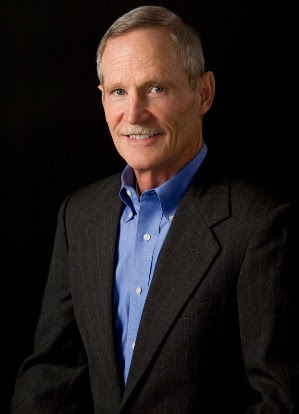 Whether his subject is literature, history, or science, Collins Hemingway has a passion for the art of creative investigation. For him, the most compelling fiction deeply explores the heart and soul of its characters, while also engaging them in the complex and often dangerous world in which they have a stake. He wants to explore all that goes into people's lives and everything that makes tThe hem complete though fallible human beings. His fiction is shaped by the language of the heart and an abiding regard for courage in the face of adversity.

As a nonfiction book author, Hemingway has worked alongside some of the world's thought leaders on topics as diverse as corporate culture and ethics; the Internet and mobile technology; the ins and outs of the retail trade; and the cognitive potential of the brain. Best known for the #1 best-selling book on business and technology, Business @ the Speed of Thought, which he coauthored with Bill Gates, he has earned a reputation for tackling challenging subjects with clarity and insight, writing for the nontechnical but intelligent reader.

Hemingway has published shorter nonfiction on topics including computer technology, medicine, and aviation, and he has written award-winning journalism.

Published books include The Marriage of Miss Jane Austen trilogy, Business @ the Speed of Thought, with Bill Gates, Built for Growth, with Arthur Rubinfeld, What Happy Companies Know, with Dan Baker and Cathy Greenberg, Maximum Brainpower, with Shlomo Breznitz, and The Fifth Wave, with Robert Marcus.

Hemingway lives in Bend, Oregon, with his wife, Wendy. Together they have three adult sons and three granddaughters. He supports the Oregon Community Foundation and other civic organizations engaged in conservation and social services in Central Oregon.

Thursday, January 17
Feature at What Is That Book About

Tuesday, January 22
Excerpt at T's Stuff
Interview at Passages to the Past

Wednesday, January 23
Review & Guest Post at To Read, Or Not to Read

Friday, January 25
Review at View from the Birdhouse
Review at Svetlana's Reads and Views

Monday, January 28
Review at For the Sake of Good Taste

Friday, February 1
Review at History From a Woman's Perspective

Tuesday, February 5
Review at Maiden of the Pages

During the Blog Tour we will be giving away a $25 Amazon Gift Card! To enter, please use the Gleam form below.

– Giveaway ends at 11:59pm EST on February 9th. You must be 18 or older to enter.
– Giveaway is open to US only.
– Only one entry per household.
– All giveaway entrants agree to be honest and not cheat the systems; any suspect of fraud is decided upon by blog/site owner and the sponsor, and entrants may be disqualified at our discretion.
– Winner has 48 hours to claim prize or new winner is chosen.