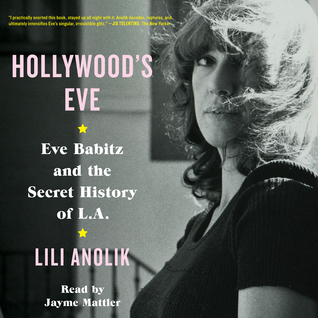 Los Angeles in the 1960s and 70s was the pop culture capital of the world—a movie factory, a music factory, a dream factory. Eve Babitz was the ultimate factory girl, a pure product of LA.

The goddaughter of Igor Stravinsky and a graduate of Hollywood High, Babitz posed in 1963, at age twenty, playing chess with the French artist Marcel Duchamp. She was naked; he was not. The photograph, cheesecake with a Dadaist twist, made her an instant icon of art and sex. Babitz spent the rest of the decade rocking and rolling on the Sunset Strip, honing her notoriety. There were the album covers she designed: for Buffalo Springfield and the Byrds, to name but a few. There were the men she seduced: Jim Morrison, Ed Ruscha, Harrison Ford, to name but a very few.

Then, at nearly thirty, her It girl days numbered, Babitz was discovered—as a writer—by Joan Didion. She would go on to produce seven books, usually billed as novels or short story collections, always autobiographies and confessionals. Under-known and under-read during her career, she’s since experienced a breakthrough. Now in her mid-seventies, she’s on the cusp of literary stardom and recognition as an essential—as the essential—LA writer. Her prose achieves that American ideal: art that stays loose, maintains its cool, and is so sheerly enjoyable as to be mistaken for simple entertainment.

For Babitz, life was slow days, fast company until a freak fire in the 90s turned her into a recluse, living in a condo in West Hollywood, where Lili Anolik tracked her down in 2012. Anolik’s elegant and provocative new book is equal parts biography and detective story. It is also on dangerously intimate terms with its subject: artist, writer, muse, and one-woman zeitgeist, Eve Babitz.

I had absolutely no idea who Eve Babitz was when I started reading this book. Several years ago, there was a Vanity Fair article written by the author of this book that had a lot of people talking about Eve. I wasn't one of them. For whatever reason and whatever was going on in my life, it passed me by. I came across this book a few months ago and read the summary and knew I needed to learn all about Eve.

Hollywood's Eve: Eve Babitz and the Secret History of L.A. is written by Lili Anolik as part biography, part love letter to Eve. Anolik recounts Eve's sometimes glamorous and sometimes shocking life among Hollywood's elite: from the picture that made her famous to her life now. The biography is often interrupted by Anolik's thoughts and opinions of the situations she's writing about. I wasn't sure how I felt about that aspect of this book, but by the end I decided I quite liked it.

Eve Babitz is a rare jewel who lives life on her own terms. She's an artist, a writer, and a badass.
As the summary states, Eve was in the hub of Pop Culture in the 60s and 70s. I didn't realize how similar Babitz's and Anolik's writing styles were until I listened to a clip of Hollywood's Eve by Eve Babitz in which she recounts her life in the 60s and 70s. That's probably one of the many reasons Anolik feels so akin to Babitz.

I listened to this book as an audiobook. I don't tend to listen to biographies much on audio, because they tend to be a bit dull in my opinion. (Please note that I don't mean biographies are dull. I love nonfiction books out the wazoo; I just don't like them as audiobooks.) But something told me that I should try this one, and I loved it. It's narrated by Jayme Mattler. She seemed to capture the mood of the biography perfectly. It's seemed as if Jayme came over to tell me a story about a woman named Eve.

After I finished this book, I added several of Babitz's books to my wishlist. She has a no-holds-barred attitude that is intriguing, and after listening to a clip of her book, I know I'm going to enjoy reading them. And if there isn't already, there should be a movie in the works about the brazen author.

*I received a copy of this audiobook courtesy of Simon & Schuster Audio. This in no way influenced my opinion.