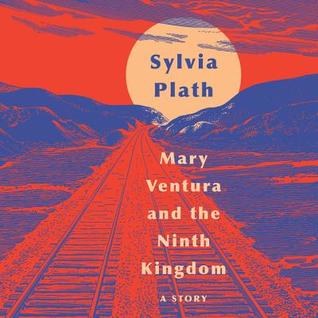 This newly discovered story by literary legend Sylvia Plath stands on its own and is remarkable for its symbolic, allegorical approach to a young woman's rebellion against convention and forceful taking control of her own life.

Written while Sylvia Plath was a student at Smith College in 1952, Mary Ventura and The Ninth Kingdom tells the story of a young woman's fateful train journey.

Lips the color of blood, the sun an unprecedented orange, train wheels that sound like "guilt, and guilt, and guilt" these are just some of the things Mary Ventura begins to notice on her journey to the ninth kingdom.

"But what is the ninth kingdom?" she asks a kind-seeming lady in her carriage. "It is the kingdom of the frozen will," comes the reply. "There is no going back."

Sylvia Plath's strange, dark tale of female agency and independence, written not long after she herself left home, grapples with mortality in motion.

If you're looking for a book to read on your commute, why not try Mary Ventura and The Ninth Kingdom by Sylvia Plath.

Sylvia Plath and I go way back. I've been reading about her life for over a decade, as well as read a multitude of her writings. I was pretty eager to read this short story that she wrote while a student at Smith College in 1952. She submitted it to a magazine, but, sadly, it was rejected.

It tells an extraordinary story that is still as relevant today as it was in 1952. The main character, Mary, boards a train to The Ninth Kingdom where she meets an older lady that seems to have some inner knowledge of the workings of the train. Mary starts to struggle internally as the train moves closer to its destination.

This short story is captivating from the first sentence that is uttered. Maybe this story was too dark in 1952, but it's perfect for today's audiences. Mary struggles with many things readers will relate to.

I listened to this book as an audiobook. It's narrated by Orlagh Cassidy, who did a wonderful job. She conveyed the emotions of a confused and scared Mary perfectly. Do yourself a favor, and listen to this book.