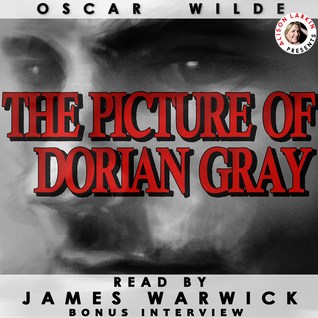 This powerful new recording of Wilde’s famous novel tells the unforgettable story of a hedonistic young man who makes a sinister deal to preserve his youth. When his wish is granted, Dorian Gray slips into a life of sensuality, debauchery, and murder.

In this uncensored version, TV star James Warwick’s inspired, nuanced narration is followed by a fascinating conversation. The actor talks candidly with Alison Larkin about Oscar Wilde and Warwick's own challenges as a gay man living in London at a time when homosexuality was illegal.

Oscar Wilde (1854-1900) was an Irish poet and playwright who is celebrated still for his sharp wit, flamboyant style, and sparkling conversation.

James Warwick is most famous for his starring role playing Tommy in Agatha Christie’s Tommy and Tuppence series on PBS for Masterpiece Theater. He has also played many leading roles on Broadway and London's West End, originating the role of Brad in the Rocky Horror Picture Show and playing King Arthur in Camelot. His last starring role in an Oscar Wilde play was in Peter Hall’s production of The Ideal Husband on Broadway. His narration of Agatha Christie's The Mysterious Affair at Styles, also for Alison Larkin Presents, also received rave reviews worldwide.

I read The Picture of Dorian Gray in my twenties. It has a lot of great themes in it such as good vs. evil, mortality, sexual identity, etc., but I don't remember feeling any particular strong feelings about the book. I've been attempting to reread books (mostly classics) that I've felt that way toward in the past, partly wondering if maturity and understanding would change the way I viewed them. The opportunity to reread The Picture of Dorain Gray fell into my inbox as an audiobook review request. And, of course, I accepted.

The audiobook is narrated by James Warwick who does a lot of work in London's West End. His voice suited this production perfectly. He portrayed the characters as I believe Wilde had intended. He really made this book come to life for me. I particularly liked the interview at the end of the audiobook Warwick had with Alison Larkin. He expressed some of the troubles he had with Dorian's character while how as a gay man he related to not being able to live as your authentic self.

Some books are better as audiobooks, and this is one of them. At least for me. While I still don't love the book, I definitely have a better understanding and an appreciation for it.