The Audies have announced their 2019 host: Tan France. 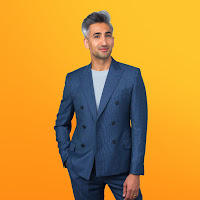 This year, the award show is getting a makeover of sorts: a new high-profile host in Queer Eye star and to-be Audiobook narrator of his own upcoming memoir, Tan France and a panel of industry personalities to serve as judges for the Audiobook of the Year category. And with major names associated with this year’s event (nominees include Sally Field, Megan Mullally, Nick Offerman, Leslie Odom, Jr., Emma Thompson and former Vice President Joe Biden,) it's no surprise that the show will be one to remember.
The Audie Awards recognize distinction in audiobooks and spoken word entertainment and are sponsored by the Audio Publishers Association (APA). 2019 is the 24th year of annual Audie Awards. Finalists are announced in 24 categories.
Congratulations to all the nominees! Tan France will be an amazing host.
See the Press Release (pdf) of the 2019 Finalists—released February 4, here. Winners will be announced at the Audies Gala, March 4.