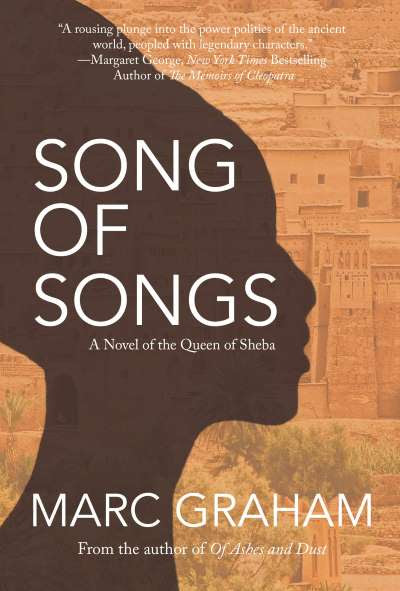 Song of Songs: A Novel of the Queen of Sheba
by Marc Graham

Lift the veil of legend for the untold story of Makeda, the Queen of Sheba, and Bathsheba, wife and mother of Israel’s first kings.

When Makeda, the slave-born daughter of the chieftain of Saba, comes of age, she wins her freedom and inherits her father's titles along with a crumbling earthwork dam that threatens her people's survival. When she learns of a great stone temple being built in a land far to the north, Makeda leads a caravan to the capital of Yisrael to learn how to build a permanent dam and secure her people's prosperity.

On her arrival, Makeda discovers that her half-sister Bilkis (also known as Bathsheba) who was thought to have died in a long-ago flash flood, not only survived, but has become Queen of Yisrael. Not content with her own wealth, Bilkis intends to claim the riches of Saba for herself by forcing Makeda to marry her son. But Bilkis’s designs are threatened by the growing attraction between Makeda and Yetzer abi-Huram, master builder of Urusalim’s famed temple. Will Bilkis’s plan succeed or will Makeda and Yetzer outsmart her and find happiness far from her plots and intrigue?

The Master opened his mouth to continue the invocation but, instead of the expected words, a high-pitched whistle rang throughout the quarry. The workers looked about for the source of the noise. Yetzer’s eyes settled on the side of the quarry where the fire blazed before the quartz outcropping. The limestone on the fringe glowed red-orange, while the quartz shimmered behind the veil of heat.
“Water,” Huram called, and the neat assembly dissolved as men raced for the great leather bladders that sat on either side of the fire.
Huram had explained to Yetzer how firing the quartz, then rapidly quenching it with water, would make the rock brittle and more easily broken up. That had been his intent. As Yetzer watched, his father’s plan rapidly came undone.
Steam hissed from the rock face. The whistle turned into a scream. The very earth seemed to bulge around the outcropping. In a moment, Yetzer foresaw what was to happen and knew he was unable to stop it.
“No,” he screamed anyway.
He ran toward his father and Pharaoh, who stood between the water bladders. Each skin held a copper tube, which a pair of workers aimed at the furious rock. Other men lowered cedar beams atop the skins to force the water’s flow.
Huram turned toward Yetzer as he cried out, but the men were already pressing down on the bladders. Water streamed toward the outcropping and the scene was lost in a cloud of vapor.
“Yetzer, be silent,” Huram ordered, but his shout was overwhelmed as the rock’s scream rose in pitch and volume.
Yetzer leapt toward the men. Huram tried to block him, but succeeded only in knocking his son into the king. The boy managed a glance at his father, whose face was masked with fury.
Then the world shattered.
Nature slowed as Yetzer’s senses raced ahead of the disaster. A storm of destruction rolled toward him, preceded by the invisible fist of some nameless god who punched him in the chest and drove the air from his lungs. The water bladders ruptured and men were thrown off their feet. They hadn’t reached the ground before the next wave struck.
Steam rolled over the men closest to the explosion, cleansed them of the dust that coated their bodies, and turned their skin sun-red. The flood from the bladders outpaced the steam, engulfing Yetzer and protecting him from the searing wave as it passed overhead.
A flurry of dust followed and, behind this, a hail of stone shards. The air hummed with the passage of the missiles. Yetzer lifted a hand in feeble defense, even as Huram clutched his throat. A crimson mist enveloped his father just before Yetzer’s upraised hand blossomed with blood.

We’ve all heard the story of the Queen of Sheba. Wasting away in her sun-worshiping idolatry, she hears of King Solomon’s legendary wisdom, travels a great distance to Jerusalem bearing gifts of gold and jewels and incense, sits at his feet to bask in his brilliance and piety, then returns to her homeland enlightened, unnamed, but much better for the experience. 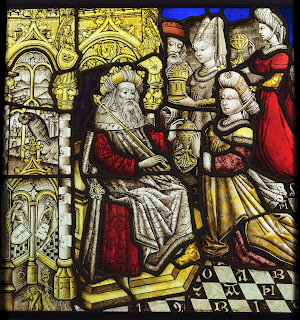 That’s the most well known, Biblical version. But what of the others?
The Judaic Song of Solomon hints at a romance between the two monarchs, but still fails to name the fabled queen. (Providing prurience to the priestly class since 300 BCE. Breasts like twin fawns? Really?) 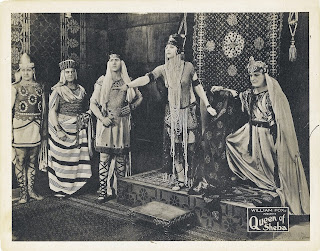 The Quran at least gives us a name, but makes Balkis (or Bilkis) a goat-legged, goose-footed infidel who may or may not have congress with demons.
In the Ethiopian national legend Kebra Negast (the Book of the Glory of Kings), she is called Makeda and is assaulted by the righteous King Solomon. Too bad for her, but it gave Ethiopia a holy(-ish) dynasty descended from King David that lasted nearly 3,000 years. Emperor Haile Selassie was deposed in 1974, but his heirs-in-exile still hold out hope for a return to the throne.
The tale that captured my imagination, though, is one I discovered in the lore of Freemasonry. While the Craft reveres King Solomon as the Founder of our Art, this version of the story suggests that the great and beautiful Queen of Sheba fell in love not with Solomon, but with Hiram Abiff, the builder of his temple to Yahweh. In a fit of jealousy and rage, Solomon sabotages the foundry where the great bronze works for the temple are being prepared. When this fails to discredit Hiram, Solomon has him kidnapped and murdered. How all this affects our Queen, we are not told.
I am a firm believer in the old adage that history is written by the victors. I’ve also been a big fan of the underdog (and Underdog) most of my life. I’m fascinated by the stories that disappear, swept away in the detritus of defeat. So how do we learn these stories?
Western history provides us a few examples, through the serendipitous discoveries of Qumran (Israel), and Nag Hammadi and Beni Masar (Egypt), all in the mid- to late-20th Century. These sites provided us with versions of the gospels that had been wiped out by the political and ecclesiastical victors of the Roman-occupied Middle East as the official version of Christianity began to take shape.
These documents (most burned, lest they otherwise be deemed gospels in their own right) paint a very different picture than the Gospels handed down to posterity by the holy and beneficent powers that be. Rather than a long-suffering anointed one who only seeks peace between the people and their political masters, we find an iconoclastic rebel who teaches personal freedom (and responsibility) and who orchestrates his own demise so that the power of the truth might be liberated for the masses.
The best-laid plans...
But these discredited gospels provide us with a template of how to read backward through history, how to peer through the other end of the looking-glass and decipher the images we’re left with.
The dominant version of the Queen of Sheba story was drafted some five hundred years after the events they purport to represent. Israel had been demolished, and her cousin Judea survived only in name. In response to the threats by foreign powers, the political and religious powers decided that a new national myth was in order. While the common folk continued to worship the ancient gods and goddesses of the land, their leaders established a new order under a single male deity, and did away with the ancient customs for good.
In crafting Song of Songs: A Novel of the Queen of Sheba, I had to look back through this lens of a fledgling monotheist patriarchy. What would men of tenuous power fear? What ancient beliefs would need to be buried by those seeking to create a new way of worship? By understanding this perspective, the needs and fears of the victors, I was able to weave a way back into the story of the underdogs, the losers of this particular piece of history.
This method of rediscovering history can serve us well. In an age when the victor-of-the-moment establishes history, when the public memory spans only a few days, storytellers need to understand how to look back. By reverse-engineering our history-as-fact and breaking it down into its basic elements, the real story, the stories of flesh-and-blood women and men, may be preserved for those who come behind us. Marc Graham studied mechanical engineering at Rice University in Texas, but has been writing since his first attempt at science fiction penned when he was ten. From there, he graduated to knock-off political thrillers, all safely locked away to protect the public, before settling on historical fiction. His first novel, Of Ashes and Dust, was published in March 2017.

He lives in Colorado on the front range of the Rocky Mountains, and in addition to writing, he is an actor, narrator, speaker, story coach, shamanic practitioner, and whisky afficianado (Macallan 18, one ice cube). When not on stage or studio, in a pub, or bound to his computer, he can be found hiking with his wife and their Greater Swiss Mountain Dog.

Tuesday, April 16
Review & Interview at Passages to the Past

Thursday, April 18
Review at Bookfever
Excerpt at Maiden of the Pages

Friday, April 19
Feature at What Is That Book About
Guest Post & Excerpt at To Read, Or Not to Read

Wednesday, April 24
Review at A Chick Who Reads

Tuesday, April 30
Review & Excerpt at Clarissa Reads it All

Wednesday, May 1
Review at Library of Clean Reads

Monday, May 6
Review at Just One More Chapter

Tuesday, May 7
Feature at CelticLady's Reviews

Thursday, May 9
Excerpt at Kimber Li

Friday, May 10
Review at History from a Woman’s Perspective

Monday, May 13
Review at Curling up by the Fire

During the Blog Tour, we will be giving away two paperback copies of Song of Songs! To enter, please use the Gleam form below.

– Giveaway ends at 11:59 pm EST on May 17th. You must be 18 or older to enter.
– Giveaway is open to the US & Canada only.
– Only one entry per household.
– All giveaway entrants agree to be honest and not cheat the systems; any suspicion of fraud is decided upon by blog/site owner and the sponsor, and entrants may be disqualified at our discretion.
– The winner has 48 hours to claim prize or new winner is chosen.