The Time Collector by Gwendolyn Womack

Travel through time with the touch of a hand.

Roan West was born with an extraordinary gift: he can perceive the past of any object he touches. A highly skilled pyschometrist, he uses his talents to find and sell valuable antiques, but his quiet life in New Orleans is about to change. Stuart, a fellow pyschometrist and Roan’s close friend, has used his own abilities to unearth several out-of-place-artifacts or “ooparts”—like a ring that once belonged to the seventeenth-century mathematician and philosopher René Descartes, but was found buried in prehistoric bedrock.

The relics challenge recorded history, but soon after the discovery, Stuart disappears, making him one of several psychometrists who have recently died or vanished without a trace. When Roan comes across a viral video of a young woman who has discovered a priceless pocket watch just by “sensing” it, he knows he has to warn her—but will Melicent Tilpin listen? And can Roan find Stuart before it’s too late?

The quest for answers will lead Roan and Melicent around the world—before it brings them closer to each other and a startling truth—in the latest romantic thriller from Gwendolyn Womack, the bestselling, PRISM Award-winning author of The Memory Painter and The Fortune Teller.

If an historian could be compared to a mad scientist with a laboratory, this room would definitely fit the bill. Instead of beakers and vials it was words and relics. There was also something incredibly intimate about the space. There were no pin lights for the glass displays and the books all looked well-worn and used—like they’d been read too many times.
Melicent turned toward the desk, and a lone photograph on the shelf caught her eye. At first she thought it was a picture of Roan, but it was his father. Robert West had glasses on, his black hair was blowing in the wind, and his head was thrown back in laughter. The shot was a close-up, taken on a mountaintop with a ledge of rock and clouds visible on each side of the frame.
Melicent studied his profile. The jawline, the aquiline nose—everything about him was Roan. She reached out and picked up the metal frame to study the photo more closely.
The moment she held the picture in her hand she heard the music.
The song sounded far-off, playing in the distance. Then it began to gain resonance, like a radio in the room, and she recognized it as “Unchained Melody” by the Righteous Brothers.
Oh, my love, my darling, I’ve hungered for your touch
A long, lonely time . . .
Images and thoughts cascaded over the music. They’d been woven into the melody. Roan’s parents had gotten married in New Orleans. It had been a boisterous celebration with a wedding parade down Bourbon Street and a second line brass band. The next day they’d flown to Mexico City for their honeymoon. Jocelyn had taken the photo of Robert right as the sun was rising on top of Popocatépetl, the most active volcano in Mexico and one of the highest mountains in North America. They’d camped overnight to catch the sunrise. Within the silence at the summit, they could feel the rumbling energy of the earth. There had not been an eruption since 1947, but they thought there might be another in their lifetime. They both agreed Roan was conceived that night.
The imprints within the frame poured into her. Melicent didn’t know how long she stood there until she turned to find Roan standing in the doorway with two wineglasses in hand. Embarrassment flooded her cheeks and she put the picture frame back down.
“Your father’s picture,” she said, stating the obvious and realizing she’d just witnessed some very personal memories.
“Yes.” He came toward her to offer her the wine.
She murmured her thanks and turned back toward the picture, still unbalanced from the deluge of information it had imparted. “Have you touched this?”
Roan stared at the picture of his father and shook his head. “I don’t touch my parents’ things. It’d be infringing.”
He hadn’t meant to say it as a reprimand, but still she could feel a fresh flush on her face—she had infringed. It hadn’t been intentional, but she’d seen private moments. Every anniversary Jocelyn would play “Unchained Melody” to hear her wedding song. It’s why the photo was so full of the music.
Melicent could feel the lingering emotions from the imprints squeezing her throat, taking away any words she might have said. Instead she took a sip of the wine. After reading the imprints, it felt like the lines of Jocelyn’s life and her own had momentarily blurred, and the wedding song was an echo in the room that would never fade.
Roan had a closed look on his face. “They were complicated. They divorced when I was thirteen.” It was obvious he didn’t like talking about it. “Some people aren’t meant to be together even if they want to be. Life gets in the way.”
Melicent looked up at him and realized he wasn’t just talking about his parents. She set her wine down and took a step toward him. “I disagree.”
His eyes darkened. “Melicent,” he said in warning.
Ignoring the caution in his voice, she took the final step and kissed him, their mouths twisting in the dance that had begun on the plane and never stopped.

Praise for The Time Collector

"A wonderfully intriguing tale, filled with the mystery of objects that tell a story. The Time Collector's fast pace and fascinating premise will delight history and romance lovers."―Yangsze Choo, New York Times bestselling author of The Ghost Bride

"A compelling exploration of time, history, and our primal need to connect with the past, The Time Collector is also a rollicking adventure through ancient mysteries and the moving story of two stunningly drawn characters, chasing the answer to the question of what it means to be human."―Charlie Lovett, New York Times bestselling author of The Bookman's Tale and The Lost Book of the Grail

"Gwendolyn Womack weaves a suspenseful tale that tackles the question of 'time'―how it’s measured, its impact on nature and human consciousness―and I could hardly put it down! The Time Collector is a treasure trove of ancient artifacts, mysticism, and intrigue, sprinkled with a dash of romance―my very favorite things. What a book!”―Heather Webb, international bestselling author of Meet Me in Monaco

"The Time Collector is a fascinating tale of psychometrists, people who touch an object and sense the stories embedded within them. Pick up this book and you too will be transported across the globe and the centuries into exhilarating worlds filled with history and mystery, magic and mysticism, romance and danger. Its pages make the past come alive. Once you hold this object in your hands, you won’t be able to put it down."―Amy Weiss, author of Crescendo 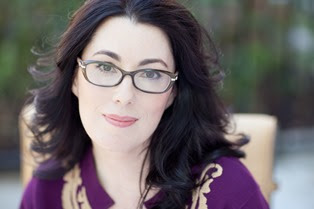 Originally from Houston, Texas, GWENDOLYN WOMACK studied theater at the University of Alaska, Fairbanks and holds an MFA in Directing Theatre, Video, and Cinema from California Institute of the Arts. She is the USA Today bestselling author of The Fortune Teller and the RWA Prism Award-winning reincarnation thriller, The Memory Painter. She resides in Los Angeles with her family.

Thursday, April 18
Feature at What Is That Book About
Excerpt at Myths, Legends, Books & Coffee Pots

Friday, April 19
Review at Passages to the Past

Monday, April 22
Review at My Reading Chronicles
Review at History from a Woman’s Perspective

Tuesday, April 23
Feature at Cover To Cover Cafe
Excerpt at To Read, Or Not to Read

Thursday, April 25
Interview at Passages to the Past

Wednesday, May 1
Review & Excerpt at Clarissa Reads it All

Saturday, May 4
Review & Interview at Jorie Loves a Story

Sunday, May 5
Review at Carole's Ramblings

Monday, May 6
Review at A Chick Who Reads

Wednesday, May 8
Feature at CelticLady's Reviews

Friday, May 10
Review at Coffee and Ink

During the Blog Tour, we will be giving away a signed copy of The Time Collector! To enter, please use the Gleam form below.

– Giveaway ends at 11:59 pm EST on May 10th. You must be 18 or older to enter.
– Giveaway is open INTERNATIONALLY.
– Only one entry per household.
– All giveaway entrants agree to be honest and not cheat the systems; any suspicion of fraud is decided upon by blog/site owner and the sponsor, and entrants may be disqualified at our discretion.
– The winner has 48 hours to claim prize or new winner is chosen. 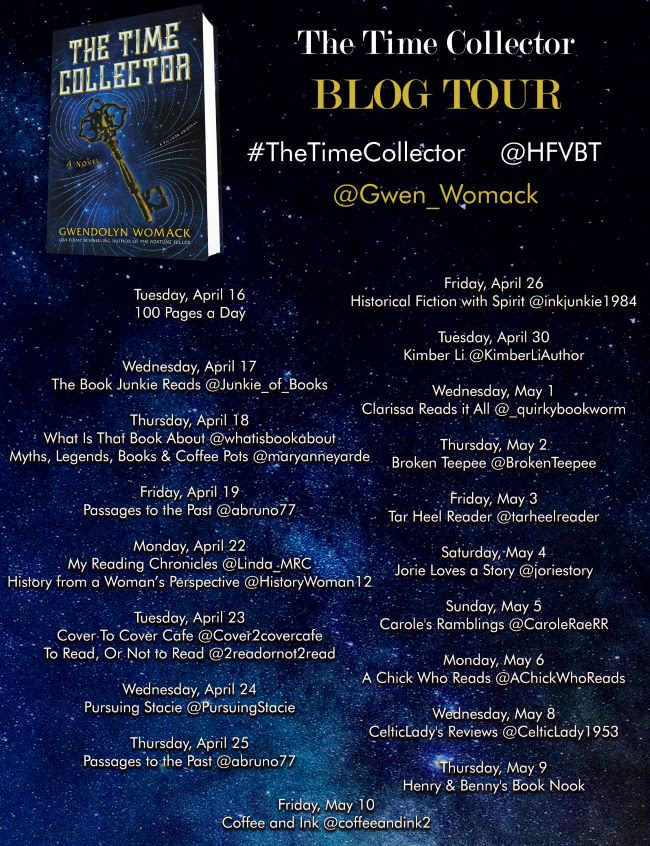