A Murderous Malady by Christine Trent Excerpt and Giveaway 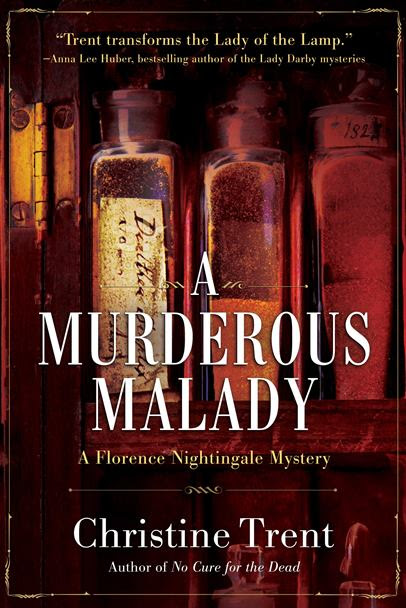 A Murderous Malady by Christine Trent

Cholera has broken out in London, but Florence Nightingale has bigger problems when people begin dying of a far more intentional cause—murder.

The London summer of 1854 is drawing to a close when a deadly outbreak of cholera grips the city. Florence Nightingale is back on the scene marshaling her nurses to help treat countless suffering patients at Middlesex Hospital as the disease tears through the Soho slums. But beyond the dangers of the disease, something even more evil is seeping through the ailing streets of London.

It begins with an attack on the carriage of Florence’s friend, Elizabeth Herbert, wife to Secretary at War Sidney Herbert. Florence survives, but her coachman does not. Within hours, Sidney’s valet stumbles into the hospital, mutters a few cryptic words about the attack, and promptly dies from cholera. Frantic that an assassin is stalking his wife, Sidney enlists Florence’s help, who accepts but has little to go on save for the valet’s last words and a curious set of dice in his jacket pocket. Soon, the suspects are piling up faster than cholera victims, as there seems to be no end to the number of people who bear a grudge against the Herbert household.

Now, Florence is in a race against time—not only to save the victims of a lethal disease, but to foil a murderer with a disturbingly sinister goal—in A Murderous Malady.

The rain had stopped but the heat had not, leaving the city in a state of oppressive clamminess. The taxi dropped me off at the Belgrave Square cab stand. As I walked down the block toward the Herbert residence, I noticed there was a quality, highly polished landau sitting about a block beyond Herbert House. It stood out to me because the carriage’s coachman was sitting on the driver’s box, as if waiting for his passengers, yet there was a glamorous woman sitting in the carriage, patiently watching the house.
The carriage was neither pulled completely off to one side of Grosvenor Crescent nor attempting to pull into traffic.
I found myself slowing my own pace. Was I mistaken to think that the woman was observing my friends’ home?
It was then that the woman raised a pair of opera glasses to her eyes, pointing them directly at an upper window of the Herbert home.
I was outraged that someone thought she could spy on the secretary at war in such a brazen manner. I picked up my walking pace, intent on confronting the woman, especially when I considered that this might be the infamous Caroline Norton.
I neared the landau, not bothering to hide or be discreet, for I wished to catch this spy off guard. “Pardon me,” I said loudly, feeling disadvantaged for being so far below her.
The woman yelped in surprised and, keeping the glasses raised to her face, lowered them briefly to peer down at me.
“Sorry, ma’am,” her coachman said to his passenger, having also just taken note of me. “I didn’t see her.” Now he addressed me. “Madam, if I could ask you to move—”
“Who are you?” I demanded angrily, ignoring the man and not taking my eyes from the woman’s face, which was once again masked by the pearl-handled glasses.
With long, tapered fingers, she slowly lowered the glasses to her lap. An unusual, tight-fitting gold bracelet adorned her wrist.
I now stared up at a woman who was quite beautiful, with flawless skin, dewy sapphire eyes, and an erect, almost noble, bearing. Her dark hair was carefully sculpted beneath a large, feather-trimmed, sky-blue hat, which showcased her luminous eyes. She seemed neither flustered nor dismayed by the heat.
Yet, on closer inspection, I could see that despite her exquisiteness, she was clearly older than me and had pale shadows beneath those eyes. She reminded me of a rose discovered on a vine late in the season: so very beautiful compared to the withered-up blooms around it, but a little desiccated when plucked and viewed in one’s palm.
The woman blinked twice languidly. “I believe the appropriate question is who you are, madam,” she said, without the least hint of offense at my presence.
“I am Florence Nightingale, a friend of the Herberts. You appear to be studying their home.”
She smiled, those rosebud lips parting to show perfectly even white teeth. “You are mistaken. I am not studying their home, only their occupants. I don’t recall Sidney mentioning you.”
“But I have heard of you,” I said flatly. “I presume you are Caroline Norton.”
She tilted her head to one side. Naturally, she had a swanlike neck with not even a freckle interrupting its graceful line. “Does he speak of me?” Despite her languorous tone, I sensed an eagerness to her question.
“Only in a manner that makes me concerned for his good health and happiness. What do you wish to achieve, Mrs. Norton, perched out here like a peregrine falcon, waiting for your unsuspecting prey?”
Caroline was quiet for several moments, but even from the ground looking up, I could see her mind whirling behind her gaze. “It is impossible for me to wait, Miss Nightingale,” she said cryptically. 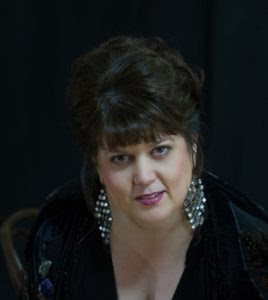 Christine Trent is the author of the Florence Nightingale Mysteries, the Lady of Ashes historical mystery series, about a Victorian-era undertaker, and three other historical novels. Christine’s novels have been translated into Turkish, Polish, and Czech. She writes from her two-story home library, where she lives with her husband, four precocious cats, a large doll collection, entirely too many fountain pens, and over 4,000 catalogued books.

Thanks to the author, we have a signed hardcover to give away to a lucky reader. To enter, please leave a comment below and include your email address or an alternate way to reach out if you win.

Giveaway is open to US addresses only. Giveaway ends on May 21.

Monday, May 6
Interview at Let Them Read Books
Review & Giveaway at Passages to the Past

Tuesday, May 7
Review at Peppermint Ph.D.

Thursday, May 9
Guest Post at Short Book and Scribes

Friday, May 10
Review at Broken Teepee
Feature at The Book Junkie Reads
Review & Excerpt at Clarissa Reads it All

Sunday, May 12
Review at A Bookish Affair

Monday, May 13
Review at A Chick Who Reads
Feature & Giveaway at Queen of Random
Interview at Myths, Legends, Books & Coffee Pots

Tuesday, May 14
Excerpt & Giveaway at To Read, Or Not to Read

Thursday, May 16
Feature at CelticLady's Reviews
Review at History from a Woman’s Perspective

Friday, May 17
Review at The Lit Bitch

Saturday, May 18
Review at Just One More Chapter

Sunday, May 19
Review, Q&A, and Giveaway at Maiden of the Pages

Monday, May 20
Giveaway at Coffee and Ink
Review & Excerpt at Jathan & Heather 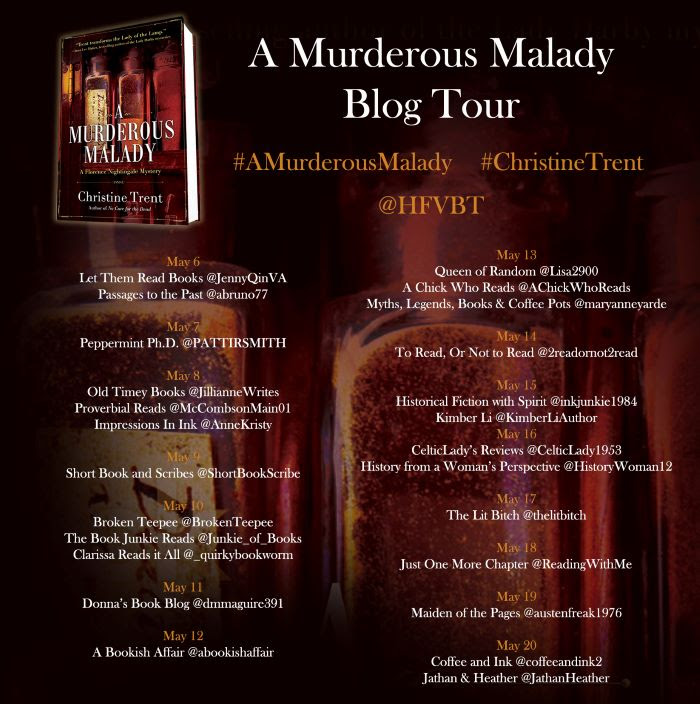