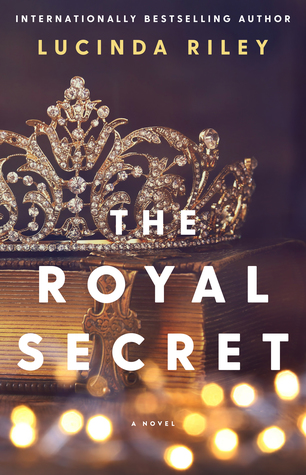 In this suspenseful and heart-pounding novel from New York Times bestselling author Lucinda Riley, an ambitious young journalist unravels a dangerous mystery that threatens to devastate the British monarchy.

My thanks to Atria and NetGalley for providing me with a review copy of the book. It in no way influenced my opinion.

The Royal Secret (also called The Love Letter in the UK) by Lucinda Riley has had an interesting road to publication. In an Author's Note at the beginning of the book, Riley explains that she began writing The Royal Secret in 1998 under the title Seeing Double. 2000 was not the year for this book. With the "popularity of the monarchy being at an all-time low and the Queen Mother's centenary year," this book didn't see the light of day. A part of me wonders if it was because this book resembled some kind of truth that people in high places wanted to keep under wraps. Although, Riley does point out that this is a pure work of fiction with no similarity between the Queen and her family. Thankfully, 2019 is the year for this book, and as far as I'm aware, the road to publishing has been smoother this time around.

The Royal Secret begins at a slow but steady pace. Joanna Haslam is a reporter trying to catch her big break in the news business. At the last minute she is assigned to cover the legendary actor, Sir James Harrison's, funeral. At the funeral, she sits beside an elderly lady who has some kind of medical fit during the funeral. Joanna helps her home. A few weeks later she receives a mysterious letter in the mail from the little old lady, and from that point on, Joanna's life changes forever. She might have the scoop of a lifetime if she finds out the truth before it's too late.

At over 500 pages, this book seemed a little too long at times. Could it have been because I was impatient for all the pieces to fall into place? Maybe so. For the most part the plot moved along well. Riley had me guessing as to what was really happening. Part historical fiction/part political thriller, The Royal Secret is a book that is hard to put down. And the ending was so good. I didn't see it coming. Lots of twists and turns filled with adventure and romance. If you're looking for a beach read this summer, I highly recommend this book!