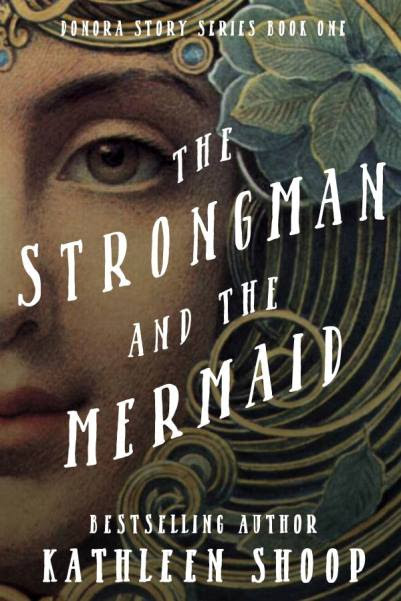 The Strongman and the Mermaid by Kathleen Shoop

Myscowa, Poland—1910
Once upon a time in tiny, rural Myscowa, Lukasz Musial competes in feats of strength against his lifelong nemesis to win passage to America. He leaves behind grinding poverty and despair, to seek the clear blue skies, and better life he sees on a postcard. Settled in Donora’s Polish community, Lukasz secures a coveted job in the wire mill, and is matched to marry Donora’s very own Polish princess. Life is set on course. The American Dream is nearly his.

Donora, Pennsylvania—1910
Mary Lancos is no princess. A tall, athletic girl who loves the water, she spends her days keeping house for families in town, digging coal out of a backyard seam and rowing her father across the Monongahela River for work. Mary is dependable, tenacious, and always ready to help when someone needs her. She dreams of a gas-heated home, a bedroom for each of her future children, and good meals on the table each night. To help make that happen Mary attends local dances, waiting for the few men who are taller than her to ask her to dance, hoping one of them is right for her.

An unexpected Christmas Eve visitor brings bad luck, and Lukasz’s world crumbles. Meanwhile, tension grows at the Lancos home when money is short and Mary’s dreams clash with her parents’ old world expectations. Just when Mary and Lukasz are at their lowest, they find themselves under an odd pink moonlit sky and Lukasz rescues Mary from a fall into frigid river water. The attraction between them is sudden and consuming, turning the pair onto an unexpected path. With mounting disapproval from Mary’s parents, and increased pressure on Lukasz, they must decide if love is enough to risk losing everything else that matters.

Even in the smoky morning haze, Mary reached the Irish house on Thompson Avenue in good time. The Dunns weren’t the only Irish family in town, but they were the only Irish family she currently worked for. The home was stately, mysterious, and welcoming. It had three floors and a cellar. The first floor was four expansive square rooms with soaring ceilings, plus a cozy fifth area—the kitchen and a keeping room, which sprawled across the back of the entire house. Mary guessed she could fit her entire house inside two of those rooms if she wedged it right. The exterior of the Dunns’ house had originally been apple red, but the soot and smoke had stained the brick an angry black, leaving only slivers of crimson near the mottled mortar.
The leading citizens of Donora—the store owners, doctors, lawyers, and the higher-ups in the mills—had bought property and built their spacious homes all at once and quick as anything. The miners, like Mary’s father, blast furnace helpers, wire-pullers, and even molders often built their homes one room at a time over the years, creating a ramshackle, haphazard look. But one thing unified every house—every single structure fell victim to the choking air that deposited filth as it swept through town.
Mary entered the Dunns’ through the back door. Clean warmth swallowed her as she hung her coat and hat in the cloakroom. Mary tiptoed into the keeping room, where she mended and ironed. The older Dunn boys spent time there practicing their letters or resting when they were sick or bored with their massive bedroom and playroom upstairs.
Entering the kitchen, Mary inhaled the scent of lemon with her whole being. Oh, it was magnificent. “Lemony” was how girls like Mary described the homes where the town big shots lived. Mary and her friends’ homes smelled like death’s cabbage, week-old meat, and eggs.
Mrs. Dunn hobbled from the direction of the butler’s pantry. She held little Peter on her hip. Strawberry patches spackled her ghostly skin, making Mary gasp.
“Watch Peter, won’t you, Mary, darling?” Mrs. Dunn smoothed her son’s hair back from his tear-drenched face and handed him to Mary.
Like always, Mary playfully pinched his cheek, hugging him close. It had always worked to calm her siblings, and Peter too. His shallow, stuttered gasps smoothed into even breaths.
Mrs. Dunn exhaled deeply and pressed both sides of her expectant belly, her eyes squeezed shut.
Mary stepped closer, fear sweeping through her. “You’re too early.”
Mrs. Dunn straightened and inhaled, nodding. “Six more weeks. Maybe,” she said through her exhale. “Just this headache and now . . . I’m so tired.” She grabbed Mary’s wrist. “I need more help today. Please.”
From all of Matka’s pregnancies, Mary knew what Mrs. Dunn needed. Her mind flew to the dance and her plans to attend it with Samuel. “I can watch Peter while I clean,” Mary said. “But I have chores at home too. And there’s the dance tonight.” Mary covered her mouth, scolding herself. The words were out, and she wanted them back. Mrs. Dunn was very generous, and Mary knew better than to complain. Still, the thought of missing the dance made her eyes sting with tears.
Mrs. Dunn gestured for Mary to follow her, then stalked away, pulling her shirtwaist loose. Mary gasped again. Her boss was far out of sorts, and she wasn’t sure how to get her gathered back up.
“I know,” Mrs. Dunn said. “Your Samuel asked you to go with him.”
“Oh, he’s not mine, but yes . . . the dance.” Oh yes, oh yes. Mary could barely keep from floating every time she thought of him and the dance.
Mrs. Dunn headed back through the butler’s pantry and into the foyer, Mary right on her heels, relieved that the woman had remembered Samuel had asked her, that it was important.
Mrs. Dunn stopped short, her large hazel eyes shifting wildly, conveying desperate pleading, something Mary wasn’t used to seeing in her. In the room above them, four sets of feet clomped, the chandelier crystals clinking and shimmering, reminding Mary the boys had a day off from school due to building repairs. Mrs. Dunn put both hands over her ears, her perfectly coiffed hair sprouting from its pins, loose locks spiraling down her cheeks. Her despair seeped through her skin, changing her from a beauty to an ordinary lunatic Mary might see dragged off to Mayview after a night of carousing.
Mrs. Dunn clawed at her scalp. “This headache.”
She looked as though she might press her ears right through her skull. Mary hated to see someone suffering. “I’ll make tea.”
Mrs. Dunn appeared childish, begging to be saved, wanting to be held as much as her son. “Tea? Oh yes. Please.”
A bang came from the playroom above them. Mrs. Dunn drew a breath and let out a scream. Peter startled, his body stiff. Mary patted his back, bouncing him while cradling his head against her shoulder. She’d heard frustrated screams from many a mother, but not from Mrs. Dunn, not from mothers living in lemony houses.
Mrs. Dunn lifted her skirts and took off for the stairs, gripping the banister, leaning on it as she ascended. “Boys!” she bellowed.
Mary followed, juggling Peter in the crook of one arm.

Kathleen Shoop has bejeweled this book with her magnificent imagination and impeccable writing. The Strongman and the Mermaid by Kathleen Shoop is a romance that goes beyond looks and settles deep into the souls of readers. Every so often, a love story comes that your heart can't let go. One of those love stories, for me, has been Mr. Darcy and Lizzy in Pride and Prejudice. Now Mary and Lukasz in The Strongman and the Mermaid will stay with me for a long time to come. –Ankita Shukla for Readers’ Favorite

The Strongman and the Mermaid by Kathleen Shoop is a gorgeous story, a gripping romance with a strong setting. The plot structure is unusual and it has beautiful twists. I love stories with great characters and a well-developed conflict and I always want to see characters evolve through the conflict. It is something that this author does impeccably well. The narrative is emotionally rich…The writing is cinematic, punctuated by exciting dialogue. The Strongman and the Mermaid will keep you awake through the night. –Romuald Dzemo for Readers’ Favorite

I was hooked from the very start...The Strong Man and the Mermaid is skillfully plotted and written in beautiful prose. The reader is pulled into a fairytale-like world with strong and memorable characters. The love adventure between Mary and Lukasz is one of the key elements that add to the entertaining potential of this narrative. Kathleen Shoop keeps it real and human, succeeding in creating an emotional connection between the reader and the characters.—Ruffina Oserio for Readers’ Favorite 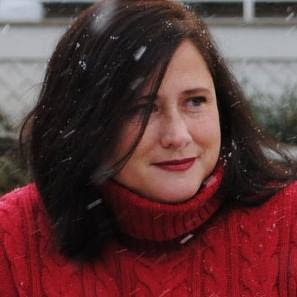 Bestselling author, Kathleen Shoop, holds a PhD in reading education and has more than 20 years of experience in the classroom. She writes historical fiction, women’s fiction and romance. Shoop’s novels have garnered various awards in the Independent Publisher Book Awards, Eric Hoffer Book Awards, Indie Excellence Awards, Next Generation Indie Book Awards and the San Francisco Book Festival. Kathleen has been featured in USA Today and the Writer’s Guide to 2013. Her work has appeared in The Tribune-Review, four Chicken Soup for the Soul books and Pittsburgh Parent magazine. She lives in Oakmont, Pennsylvania with her husband and two children.

Wednesday, May 1
Review at Passages to the Past

Thursday, May 2
Review at Pursuing Stacie
Feature at Comet Readings

Friday, May 3
Review at Bibliophile Reviews

Tuesday, May 7
Excerpt at To Read, or Not to Read
Guest Post at Let Them Read Books

Friday, May 10
Review at View from the Birdhouse
Feature at What Is That Book About
Excerpt at Myths, Legends, Books & Coffee Pots

Tuesday, May 14
Excerpt at The Book Junkie Reads

Thursday, May 16
Interview at Passages to the Past

Monday, May 20
Feature at The Lit Bitch
Review at Jorie Loves a Story

Tuesday, May 21
Review at Macsbooks

Wednesday, May 22
Review at Coffee and Ink
Review at Peaceful Pastime
Interview at Jorie Loves a Story
Review at My Reading Chronicles

During the Blog Tour, we will be giving away a copy of The Strongman and the Mermaid and a $50 Amazon Gift Card! To enter, please use the Gleam form below.

– Giveaway ends at 11:59 pm EST on May 22nd. You must be 18 or older to enter.
– Giveaway is open INTERNATIONALLY.
– Only one entry per household.
– All giveaway entrants agree to be honest and not cheat the systems; any suspicion of fraud is decided upon by blog/site owner and the sponsor, and entrants may be disqualified at our discretion.
– The winner has 48 hours to claim prize or new winner is chosen. 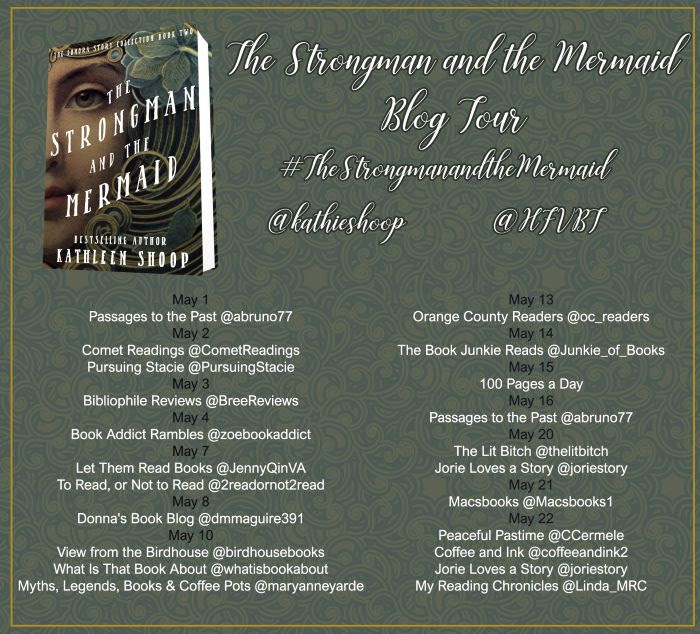