Audiobook Review: The Other Queen 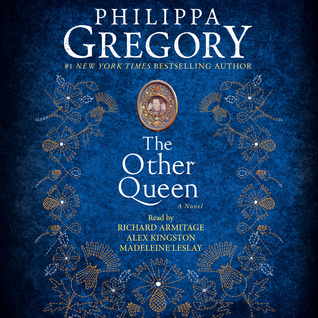 Fleeing violent rebellions in Scotland, Mary looks to Queen Elizabeth of England for sanctuary. Though promised protection, Mary, perceived as a serious threat to the English crown, is soon imprisoned by her former friend as a “guest” in the house of George Talbot, Earl of Shrewsbury, and his indomitable wife, Bess of Hardwick. The newly married couple welcomes the condemned queen into their home, certain that serving as her hosts and jailers will bring them an advantage in the cutthroat world of the Elizabethan court.

To their horror, they grow to realize that the task will bankrupt their estate and lose them what little favor they’ve managed to gain as their home becomes the epicenter of intrigue and rebellion against Queen Elizabeth. And Mary is not as hopeless as she appears, manipulating the earl and spinning her own web of treachery and deceit, as she sharpens her weapons to reclaim her Scottish throne—and to take over Queen Elizabeth’s of England.

I wanted to read/listen to this book mostly because it was written by Philippa Gregory. I haven't read all her books, but what I have read, I've really enjoyed. The reason I wanted to listen to this as an audiobook is because it is narrated partly by Alex Kingston and Richard Armitage.

Alex Kingston in a great actress, whom I admire. Though she's narrated many audiobooks in the past, this is my first experience with her as a narrator. She did not disappoint. Richard Armitage is a different story. Audible released a Christmas freebee in December 2019, The Christmas Hirelings
by Mary Elizabeth Braddon, and he did an amazing job with it. In fact, there were times that I forgot just one person was narrating the story. I had no previous experience with Madeleine Leslay. But now I do, and I'm glad.

The Other Queen is told from three points of view: Mary Queen of Scots (narrated by Leslay), Bess of Hardwick (narrated by Kingston), and George Talbot, Earl of Shewsbury (narrated by Armitage). It takes place after Mary flees from a turbulent Scotland into England, hoping to find sanctuary. However, Mary is perceived as a threat to the kingdom. Queen Elizabeth calls on her faithful servant, George Talbot, to house the displaced queen.

The newlyweds, Bess and George, take Mary into their home as an honored quest, but also as a prisoner. It's not long until the stress and financial burden of taking on the queen starts to tear their household apart. Not to mention the plots to free Mary and put her on the English throne that could have them all condemned for treason--guilty or not.

The characters in this novel are complex to say the least. Bess of Hardwick seems more concerned with money than with anything else. However, being a woman in the 1500s didn't leave you with a lot of options. So her obsession with finances can be understood, though she does seem a bit harsh at times.

It was said to look at Mary was to love her. Many people fell under her spell. She was exactly what a queen should be. She charmed all. Did she plot for Elizabeth's throne, or was she innocent? She seemed to trust all the wrong people. There were many layers to this queen without a country.

The Earl of Shrewsbury was as loyal as they come. He would do anything for Queen and country. His loyalty was famous. However, her could not stand up to the beguiling nature of Mary, not that he tried very hard. At times I felt so sorry for him because he wanted to believe Mary so badly that it almost cost him everything.

This isn't a part of history many authors have written about. I loved that Gregory explored the alternate points of view of the main characters. The only issue I had with The Other Queen is that at times it was repetitive, especially at the beginning of the book. Still, the book was pretty awesome. Also, I highly recommend the audiobook. The narration was outstanding!

*I received this audiobook from the publisher for review purposes. This in no way influenced my opinions.