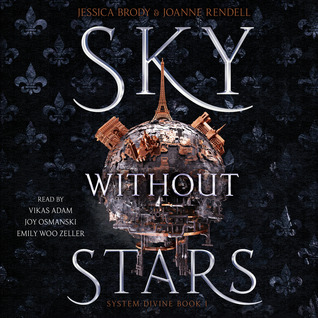 A thief.
An officer.
A guardian.

When the Last Days came, the planet of Laterre promised hope. A new life for a wealthy French family and their descendants. But five hundred years later, it’s now a place where an extravagant elite class reigns supreme; where the clouds hide the stars and the poor starve in the streets; where a rebel group, long thought dead, is resurfacing.

Chatine is a street-savvy thief who will do anything to escape the brutal Regime, including spy on Marcellus, the grandson of the most powerful man on the planet.

Marcellus is an officer—and the son of a renowned traitor. In training to take command of the military, Marcellus begins to doubt the government he’s vowed to serve when his father dies and leaves behind a cryptic message that only one person can read: a girl named Alouette.

Alouette is living in an underground refuge, where she guards and protects the last surviving library on the planet. But a shocking murder will bring Alouette to the surface for the first time in twelve years…and plunge Laterre into chaos.

All three have a role to play in a dangerous game of revolution—and together they will shape the future of a planet.

*I received an mp3 file of this audiobook for review purposes only. It has in no way influenced my thoughts on this book.

Part of what grabbed my attention about Sky Without Stars is that it's a retelling of Victor Hugo's Les Misérables. I'm a huge fan of both the book and musical. I entered into this audiobook with a little trepidation with one question on my mind: How will it compare to the original?

The book itself is rather long and it's only the first book of at least two books. However, it didn't really register that 18 hours had passed while I listened to it. In fact, an hour would go by rather quickly, which is a good sign.

The story is told from three points of view: Chatine, a thief; Marcellus, an officer, and Alouette, a guardian. Each point of view had it's own narrator, and I loved that. It gave each character a unique voice. Although, sometimes the narration seemed a little too quiet.

Sky Without Stars has much in common with Les Misérable. I could see many similarities, but I could also see many differences as well. I liked this aspect too, because at the heart they have the same message. The characters resemble those in Les Misérable, though a little more dramatic than they needed to be at times.

Overall, I enjoyed listening to this title. The book ended with a cliffhanger, so the authors have sucked me in to listening to the sequel when it comes out. Which I suspect was their plan all along. If you like science fiction/fantasy and you're not afraid of big books, you should check this book out--even if you haven't read Les Misérable.