Review: Death in a Desert Land 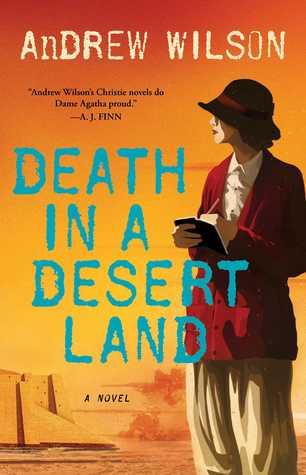 Fresh from solving the gruesome murder of a British agent in the Canary Islands, mystery writer Agatha Christie receives a letter from a family who believe their late daughter met with foul play. Before Gertrude Bell overdosed on sleeping medication, she was a prominent archaeologist, recovering ancient treasures in the Middle East. Found near her body was a letter claiming that Bell was being followed. To complicate things further, Bell was competing with another archeologist, Mrs. Woolley, for the rights to artifacts of immense value.

Christie travels to far-off Persia, where she meets the enigmatic Mrs. Woolley as she is working on a big and potentially valuable discovery. Temperamental but brilliant, Mrs. Woolley quickly charms Christie but when she does not hide her disdain for the recently deceased Miss Bell, Christie doesn’t know whether to trust her—or if Bell’s killer is just clever enough to hide in plain sight.

I've only been a fan of Agatha Christie for a short time. I've read a handful of her books, which I loved. On discovering her books, I've also discovered several other authors who have paid tribute to Christie by writing their own mysteries inspired by her. Andrew Wilson is one of these authors. I came across his first two books in the series early last year. I loved how he took facts based on Christie's life and used them to build a series that is wonderfully brilliant with the lead character being no other than the Queen of Mystery herself.

Death in a Desert Land takes place in Ur, a land that is as old as time. Christie receives a letter from a family who believes their relative, Gertrude Bell, has been murdered even though it is thought she committed suicide.. After talking it over with Davidson, her government colleague, it is agreed that Christie should go to Ur to investigate.

From the moment Christie meets the Woolley's she realizes that not everything is at it seems. Mrs. Woolley is charming and brutal. She doesn't hide her dislike of Ms. Bell. The deeper Agatha digs, the more suspicious she becomes. And of course when another person turns up dead, the pressure is put on Christie to solve the crime before somebody else dies.

I often wonder if Christie was approached in real life by the police to solve the unsolvable. I believe she must have had a singular mind to come up with such thrilling plots. I love the fact that Wilson uses true elements from Christie's life to build a mystery of his own. One of my favorite parts of this book, besides the actual story, is the author's note at the end titled "The Facts." In this part, Wilson lays out what is true and what was a product of his imagination.

As for the story itself, I loved it. Truly. It did remind me of one of Christie's stories while reading, with enough differences to make it its own. There's also a multitude of characters to choose from when trying to guess the murderer. Without giving anything away, I did guess the murder, but not the motive. However, it took me most of the book to do so. And there were enough surprises that it didn't take away from the story. I'm not sure when Wilson's next book in the Agatha Christie series will come out, but there's only one thing to do in the meantime: read more Agatha Christie books!

A Talent For Murder
A Different Kind of Evil