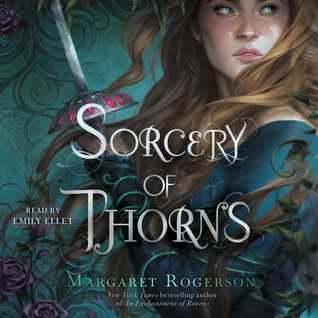 All sorcerers are evil. Elisabeth has known that as long as she has known anything. Raised as a foundling in one of Austermeer’s Great Libraries, Elisabeth has grown up among the tools of sorcery—magical grimoires that whisper on shelves and rattle beneath iron chains. If provoked, they transform into grotesque monsters of ink and leather. She hopes to become a warden, charged with protecting the kingdom from their power.

Then an act of sabotage releases the library’s most dangerous grimoire. Elisabeth’s desperate intervention implicates her in the crime, and she is torn from her home to face justice in the capital. With no one to turn to but her sworn enemy, the sorcerer Nathaniel Thorn, and his mysterious demonic servant, she finds herself entangled in a centuries-old conspiracy. Not only could the Great Libraries go up in flames, but the world along with them.

As her alliance with Nathaniel grows stronger, Elisabeth starts to question everything she’s been taught—about sorcerers, about the libraries she loves, even about herself. For Elisabeth has a power she has never guessed, and a future she could never have imagined.

*I received this audiobook from the publisher for review purposes. This is no way influenced my opinion.

I couldn't resist a book about a girl who grows up in a library guarding grimoires. Not to mention these grimoires have personalities of sorts. And of course the mystery and magic that surround the library.

Elisabeth was taken in at one of Austermeer's Great Libraries as a baby. She's grown up among the tools of sorcery, even though sorcerer's are considered dangerous. Especially their grimoires, which can turn into leathery monsters filled with ink. Elisabeth's goal is to one day be a warden that will protect the kingdom from their power.

Her dream is shattered when she awakes to find a grimoire has escaped. Elisabeth soon finds herself under investigation for the crime. She is shipped off to the capital to await trial. Her escort and guard, Nathaniel Thorn, is also a sorcerer. Whom she's loathed to trust. However, she starts to question everything she knows about the libraries and sorcerers.

I highly enjoyed this novel as an audiobook. Time seemed to fly while I was listening. The storyline was really good and not something I've come across before. I loved the mystery that at times seemed almost Gothic in nature. Rogerson has a great descriptive element to her writing that really makes the story come alive. This is the first book I read by the author, but I'm hoping there might be a sequel to this one. I'll be keeping an eye out for it.