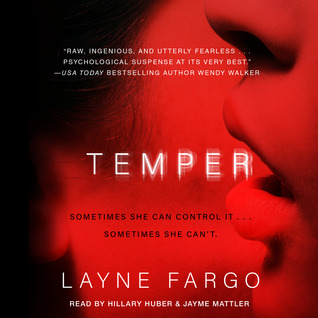 After years of struggling in the Chicago theater scene, ambitious actress Kira Rascher finally lands the role of a lifetime. The catch? Starring in Temper means working with Malcolm Mercer, a mercurial director who’s known for pushing his performers past their limits—on stage and off.

Kira’s convinced she can handle Malcolm, but the theater’s co-founder, Joanna Cuyler, is another story. Joanna sees Kira as a threat—to her own thwarted artistic ambitions, her twisted relationship with Malcolm, and the shocking secret she’s keeping about the upcoming production. But as opening night draws near, Kira and Joanna both start to realize that Malcolm’s dangerous extremes are nothing compared to what they're capable of themselves.


*I received a digital file of Temper from the publisher for review purposes. All opinions are my own and are in no way influenced by this.

To be perfectly honest, I almost stopped listening to Temper about an hour in because I had a hard time getting interested in the story. I decided to listen a bit more before making a decision whether to continue or not. But then it was sort of like watching a train wreck. I just couldn't look away. Even after I finished, I had to sit back and think about the story. And I'm not quite sure how I feel about it yet.

Temper is told from duel points of view. The first is Kira, an actress, who lands a dream role in the Chicago theater scene with the illustrious Malcolm Mercer. Malcolm has a reputation for being a dark horse. The second point of view is Joanna Cuyler, the theater's co-founder, and she's not Kira's biggest fan. Jayme Mattler and Hillary Huber narrate these two complex characters and bring this interesting(?) story to life.

Temper left me with mixed emotions. I can't really identify what those emotions are. Curiosity? Intrigue? Revolting? Fascination? It kind of makes you wonder what's lying beneath the surface of the people you meet everyday. Or what's underneath your own skin. What are you capable of?