I finished reading the Poldark series, and I regret nothing!

In 2015 I discovered, thanks to PBS, the Poldark saga. I fell in love with the television series first, and then I fell in love with the books. After the first season ended, I started devouring the books, only a few at a time as to go along with each season. However, this past year the television series came to an end, and I had made it a goal to finish all twelve Poldark books by the end of the year. I failed. I got so close with reading ten of the twelve books. So it then became my January goal--which I smashed!

Enough can't be said about how amazing these books are. The series is a complex tapestry with amazing characters. I loved and hated Ross. I adored Demelza. Elizabeth drove me crazy. George Warleggan is a piece of work. And of course all the other characters are what helps make this series so interesting, not to mention all the historical details and the vivid background of Cornwall.

I have enjoyed every minute I spent reading this series, both paperback and ebook, and I even listened to a few of the books on audible. Poldark is a series that I plan on visiting again and again. If you've not had the opportunity to read it or watch the television series, you're missing out. 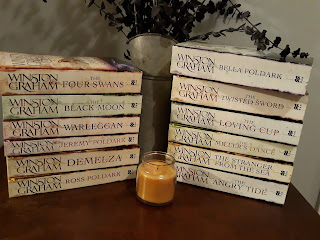 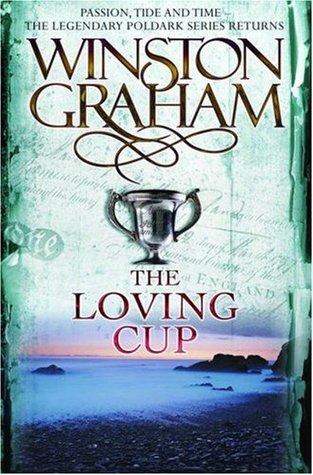 Set in the closing years of the Napoleonic Wars, this novel is part of the Poldark saga. At the heart of the novel stand Demelza and Ross Poldark, their son, Jeremy, their daughter, Clowance, and the rival family, the Warleggans.

The Loving Cup is book 8 in the series. While Ross and Demelza are still the heart of the Poldark family, this book is more about their children: Jeremy and Clowance. Jeremy is heartbroken because the girl he wants to marry won't even consider him because he doesn't have enough money. He makes a dangerous plan to rob a bank coach with some friends. This book was stressful to read. I was on the edge of my seat waiting to see if Jeremy would get caught. Winston Graham did a fantastic job creating a character that was such a great mixture of both Ross and Demelza. Clowance has broken things off with Stephen. She wonders where  life with take her. She explores life as a single lady. 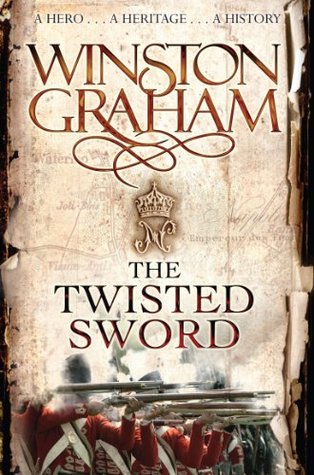 The eleventh novel in the legendary Poldark saga. Cornwall, 1815: Demelza sees a horseman riding down the valley and senses disruption to the domestic contentment she has fought so hard to achieve. For Ross has little option but to accept the summons - and travel to Paris with his family, as an "observer" of the French armed forces. Parisian life begins well with an exhilarating round of balls and parties. But the return of Napoleon brings separation, distrust and danger to the Poldarks... and always for Demelza, there is the shadow of the secret she does not even share with Ross.

The Twisted Sword refers to the twisted sword Winston Graham left in my heart. This book knocked the stuffing out of me. It had such a heavy undertone that left my feels all crazy. And frankly, it made me a little scared to read the final book. Graham really lets his characters suffer, and by extension, his readers. But that's why this series is so great. I didn't realize how attached I was to some of these characters until now. 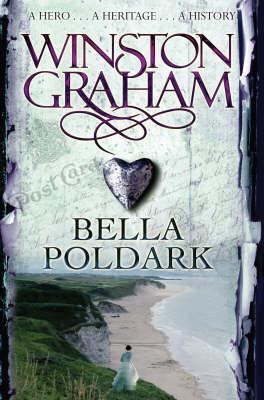 Cornwall 1818. We continue the tale of Ross and Demelza; of the wayward Valentine Warleggan, whose existence keeps open the old wounds of the feud between Ross and George; of Bella, the Poldark's youngest daughter, whose precocious talent as a singer is encouraged by her old flame, Christopher Havergal, and by a distinguished French conductor, who has more in mind than Bella's music; of Clowance, the Poldark's widowed daughter, who considers remarriage to one of two rival suitors; and of a murderer who stalks the villages of west Cornwall.

Until this last novel, Bella Poldark has been a small side story, but now she takes center stage. Bella Poldak is Ross and Demelza youngest daughter. She has a beautiful voice and a real chance to make it on the stage. She looks and acts older than she is and has already had an offers of marriage. Ross and Demelza want to nurture her talent while also keeping her from growing up too soon, especially after the loss of Jeremy.
I was a little concerned on how Graham planned on ending this series. I was afraid his readers would be in for another big heartbreak. And without any spoilers, I was happy with the way he ended the series. To be hones, I could have read twelve more books about the Poldark family. This whole series was an emotional roller coaster, but I regret nothing.

Disclaimer: I bought the entire series on Amazon, and I bought the audioboks on Audible. Thanks to St. Martin's Press and NetGalley for providing an ebook of the books I reviewed today in exchange for a review.