Showing posts from April, 2020
Show all

Week 1 Sync 2020: Check You Assumptions with Monday's Not Coming and The 57 Bus

Be sure to sign up at audiosync.com  to download this week's titles. You'll also need to download the Sora app on your phone or tablet. Follow the instructions. It's super easy. It took me less than 5 minutes to do it. And for my international friends, ALL SYNC titles are available worldwide. And remember, you only have one week to download the titles, after that you'll have to purchase them. Available April 30-May 6 Monday's Not Coming by Tiffany D. Jackson | Read by Imani Parks Published by HarperAudio AudioFile Magazine · MONDAY'S NOT COMING by Tiffany D. Jackson From the critically acclaimed author of Allegedly, Tiffany D. Jackson, comes a gripping new novel perfect for fans of E. Lockhart and Gillian Flynn about the mystery of one teenage girl’s disappearance and the traumatic effects of the truth. Monday Charles is missing, and only Claudia seems to notice. Claudia and Monday have always been inseparable—more sisters than
Post a Comment
Read more

Audiobook Review: Do the Work 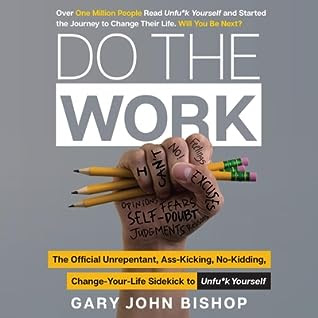 Do the Work: The Official Unrepentant, Ass-Kicking, No-Kidding, Change-Your-Life Sidekick to Unfu*k Yourself by Gary John Bishop Narrated by: Gary John Bishop Series: Unfu*k Yourself Length: 2 hrs and 12 mins Release date: 10-22-19  by HarperCollins 9781094079035 Summary Based on the life-changing lessons from the New York Times bestseller that has sold more than a million copies, a practical, hands-on guide that helps you do the work you need to change your life. In Unfu*k Yourself, Gary John Bishop inspired people to put his words into action to help them transform their fu*king lives. While millions of fans have read and embraced the messages in the book, Bishop knows it can be hard to actually take the next step and do the necessary work. Written in his no nonsense, tough-love voice, Do the Work is the kick in the ass you need to get moving and create the life you want. By drilling down into the three categories of self, people, and purpose, he helps us id
Post a Comment
Read more

Get ready for a summer full of free audiobooks with @audiobookSYNC

Free Summer Listening Get Ready for SYNC  —  Register Now NEW for 2020 , all audiobook titles will be delivered via  Sora . The SYNC audiobooks will only work with  Sora, the student reading app from OverDrive . Anyone can participate. If you have not yet registered at  audiobookSYNC   for SYNC 2020 follow these steps to be ready to access the audiobook titles. Go to  audiobookSYNC.com  — "REGISTER" for 2020 SYNC Download the  Sora  app to your device Search for the AudiobookSYNC “school” located in Portland, Maine Full Instructions on our  SYNC FAQ page SYNC 2020 Arrives Thursday, April 30 For questions about the program, titles, and how to use the toolkit to connect with students, patrons, and other listeners, please contact the  SYNC Help . The SYNC program is a project of  AudioFile Magazine  in partnership with OverDrive and audiobook publishers.
Post a Comment
Read more 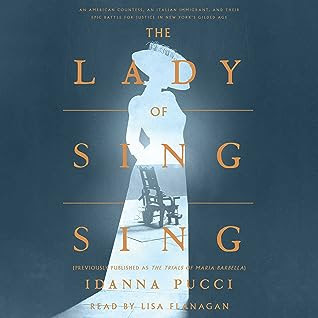 The Lady of Sing Sing: An American Countess, an Italian Immigrant, and Their Epic Battle for Justice in New York's Gilded Age by Idanna Pucci Narrated by: Lisa Flanagan, Idanna Pucci Length: 9 hrs and 5 mins Published March 10th 2020 by Simon Schuster Audio 9781797110998 Summary Previously published as The Trials of Maria Barbella. In 1895, a twenty-two-year-old Italian seamstress named Maria Barbella was accused of murdering her lover, Domenico Cataldo, after he seduced her and broke his promise to marry her. Following a sensational trial filled with inept lawyers, dishonest reporters and editors, and a crooked judge repaying political favors, the illiterate immigrant became the first woman sentenced to the newly invented electric chair at Sing Sing, where she is also the first female prisoner. Behind the scenes, a corporate war raged for the monopoly of electricity pitting two giants, Edison and Westinghouse with Nikola Tesla at his side, against each other.
Post a Comment
Read more 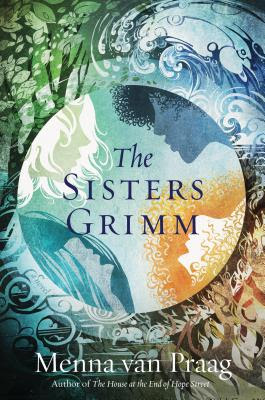 The Sisters Grimm by Menna van Praag  ebook, 448 pages Published March 31st 2020 by Harper Voyager  9780062932488 Summary Once upon a time, a demon who desired earthly domination fathered an army of dark daughters to help him corrupt humanity . . . As children, Goldie, Liyana, Scarlet, and Bea dreamed of a strange otherworld: a nightscape of mists and fog, perpetually falling leaves and hungry ivy, lit by an unwavering moon. Here, in this shadowland of Everwhere, the four girls, half-sisters connected by blood and magic, began to nurture their elemental powers together. But at thirteen, the sisters were ripped from Everwhere and separated. Now, five years later, they search for one another and yearn to rediscover their unique and supernatural strengths. Goldie (earth) manipulates plants and gives life. Liyana (water) controls rivers and rain. Scarlet (fire) has electricity at her fingertips. Bea (air) can fly. To realize their full potential, the blood siste
Post a Comment
Read more

Audiobook Review: A Graveyard for Lunatics 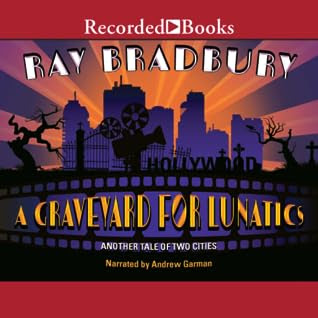 A Graveyard for Lunatics: Another Tale of Two Cities (Crumley Mysteries #2) by Ray Bradbury Narrated by: Andrew Garman Length: 10 hrs and 31 mins Published October 10th 2019 by Recorded Books (first published 1990) 9781501980930 Halloween Night, 1954. A young, film-obsessed scriptwriter has just been hired at one of the great studios. An anonymous investigation leads from the giant Maximus Films backlot to an eerie graveyard separated from the studio by a single wall. There he makes a terrifying discovery that thrusts him into a maelstrom of intrigue and mystery—and into the dizzy exhilaration of the movie industry at the height of its glittering power. My Thoughts I'm going to be completely honest with you. For most of this book, I had no idea what was going on. Previously I had only read one book by Ray Bradbury, and you can probably guess which book that is. I have a desire to read more by this author, and when the opportunity to read A Graveyard for Lu
Post a Comment
Read more

Audiobook Review: Self Made 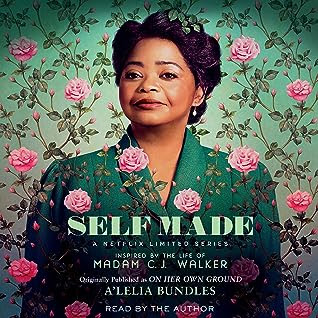 Self Made or On Her Own Ground: The Life and Times of Madam C.J. Walker by A'Lelia Perry Bundles Narrated by: A'Lelia Bundles Length: 16 hrs and 23 mins Published March 10th 2020 by Simon Schuster Audio 9781508296126 Summary The daughter of slaves, Madam C. J. Walker was orphaned at seven, married at fourteen and widowed at twenty. She spent the better part of the next two decades laboring as a washerwoman for $1.50 a week. Then—with the discovery of a revolutionary hair care formula for black women—everything changed. By her death in 1919, Walker managed to overcome astonishing odds: building a storied beauty empire from the ground up, amassing wealth unprecedented among black women and devoting her life to philanthropy and social activism. Along the way, she formed friendships with great early-twentieth-century political figures such as W.E.B. Du Bois and Booker T. Washington. On Her Own Ground is not only the first comprehensive biography of one of
Post a Comment
Read more

Audiobook Review: The Hunt for History: On the Trail of the World's Lost Treasures—from the Letters of Lincoln, Churchill, and Einstein to the Secret Recordings Onboard JFK's Air 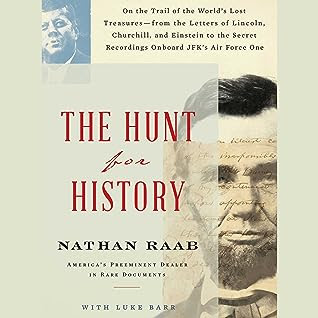 The Hunt for History: On the Trail of the World's Lost Treasures—from the Letters of Lincoln, Churchill, and Einstein to the Secret Recordings Onboard JFK's Air by Nathan Raab Narrated by: Fred Sanders Length: 8 hrs and 48 mins Published March 10th 2020 by Simon Schuster Audio 9781797104874 Summary Nathan Raab, America’s preeminent rare documents dealer, describes his years as the Sherlock Holmes of historical artifacts—questing after precious finds and determining their authenticity—and he shows us what the past can tell us about the present. A box uncovered in a Maine attic with twenty letters written by Alexander Hamilton; a handheld address to Congress by President George Washington; a long-lost Gold Medal that belonged to an American President; a note that Winston Churchill wrote to his captor when he was a young POW in South Africa; paperwork signed and filled out by Amelia Earhart when she became the first woman to fly the Atlantic; an America
Post a Comment
Read more

An essential discussion of how strong women experience their power: The Power Notebooks 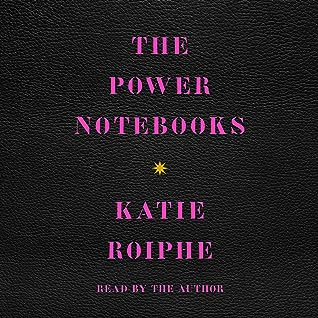 The Power Notebooks by Katie Roiphe Narrated by: Katie Roiphe Length: 6 hrs and 14 mins Published March 3rd 2020 by Simon Schuster Audio ISBN13: 9781797102863 Katie Roiphe, culture writer and author of The Morning After, shares a timely blend of memoir, feminist investigation, and exploration of famous female writers’ lives, in a bold, essential discussion of how strong women experience their power. Told in a series of notebook entries, Roiphe weaves her often fraught personal experiences with divorce, single motherhood, and relationships with insights into the lives and loves of famous writers such as Sylvia Plath and Simone de Beauvoir. She dissects the way she and other ordinary, powerful women have subjugated their own power time and time again, and she probes brilliantly at the tricky, uncomfortable question of why. In these informal musings and notes, Roiphe delves into treacherous, largely untalked about, contradictions of contemporary womanhood, going
Post a Comment
Read more
More posts