Audiobook Review: A Graveyard for Lunatics 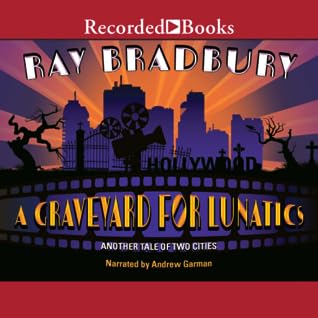 Halloween Night, 1954. A young, film-obsessed scriptwriter has just been hired at one of the great studios. An anonymous investigation leads from the giant Maximus Films backlot to an eerie graveyard separated from the studio by a single wall. There he makes a terrifying discovery that thrusts him into a maelstrom of intrigue and mystery—and into the dizzy exhilaration of the movie industry at the height of its glittering power.

I'm going to be completely honest with you. For most of this book, I had no idea what was going on. Previously I had only read one book by Ray Bradbury, and you can probably guess which book that is. I have a desire to read more by this author, and when the opportunity to read A Graveyard for Lunatics came about, I grabbed it. This is the second book in the Crumley Mystery series and even though I hadn't read the first book, I decided to jump in and hopefully land on my feet. I didn't. I landed on my bum. So let me just say, if you haven't read the first book, you should probably start there.

I listened to A Graveyard for Lunatics as an audiobook, and I have no regrets there. Andrew Garman did a fantastic job on the narration. The characters in this book are interesting and a bit bizarre at times. The story line was interesting. But if you asked me to describe this book in my own words, I couldn't. A lot was going on, and I'm not sure if I could wrap my head around all of it, at least not until the end when everything came together.

I'm certainly glad I did listen to this book. I may even go back and listen to/read the first book of this series sometime in the future. Bradbury has a lot of books/short stories to chose from, so if anybody has a recommendation, I'd be happy to hear it. I want to expand my reading horizon in the Bradbury universe.

*I received a copy of this audiobook from the publisher for review purposes only. All opinions are my own.