Audiobook Review: The Hunt for History: On the Trail of the World's Lost Treasures—from the Letters of Lincoln, Churchill, and Einstein to the Secret Recordings Onboard JFK's Air 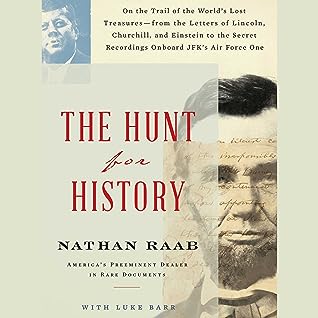 The Hunt for History: On the Trail of the World's Lost Treasures—from the Letters of Lincoln, Churchill, and Einstein to the Secret Recordings Onboard JFK's Air
by Nathan Raab
Narrated by: Fred Sanders
Length: 8 hrs and 48 mins
Published March 10th 2020 by Simon Schuster Audio
9781797104874

Nathan Raab, America’s preeminent rare documents dealer, describes his years as the Sherlock Holmes of historical artifacts—questing after precious finds and determining their authenticity—and he shows us what the past can tell us about the present.

A box uncovered in a Maine attic with twenty letters written by Alexander Hamilton; a handheld address to Congress by President George Washington; a long-lost Gold Medal that belonged to an American President; a note that Winston Churchill wrote to his captor when he was a young POW in South Africa; paperwork signed and filled out by Amelia Earhart when she became the first woman to fly the Atlantic; an American flag carried to the moon and back by Neil Armstrong; an unpublished letter written by Albert Einstein, discussing his theory of relativity.

Each day, people from all over the world contact Nathan Raab for help understanding what they have, what it might be worth, and how to sell it. The Raab Collection’s president, Nathan is a modern-day treasure hunter and one of the world’s most prominent dealers of historical artifacts. Most weeks, he travels the country, scours auctions, or fields phone calls and emails from people who think they may have found something of note in a grandparent’s attic.

In The Hunt for History, Raab shares some fascinating stories about his professional exploits: spotting a letter from British officials that secured the Rosetta Stone; discovering a piece of the first electric cable laid by Edison; restoring a fragmented letter from Andrew Jackson that led to the infamous Trail of Tears; and locating copies of missing audio that had been recorded on Air Force One as the plane brought JFK’s body back to Washington. Whether it’s the first report of Napoleon’s death or a surreptitious letter penned by Martin Luther King, Jr., to his mistress, every document and artifact Raab uncovers comes with a spellbinding story—nd often offers new insights into a life we thought we knew.

It wasn't until my first semester of college that I really started to appreciate history. I had the first amazing history professor in my life who made each class a fascinating experience. So thank you to all the teachers out there who love what they do and inspire their students to love learning. It was that class that set me on the path to view history in a way I never had before. It was more than just memorizing facts and dates; history tells a story. A compelling story.

Nathan Raab has one of the coolest jobs ever. He's a history hunter. People bring him artifacts, letters, documents, and through a meticulous process, he determines if they're authentic. He's not just a collector, he's also a seller. The Hunt for History: On the Trail of the World's Lost Treasures—from the Letters of Lincoln, Churchill, and Einstein to the Secret Recordings Onboard JFK's Air is his story.

The book begins with Raab's introduction into the world of lost treasures. He didn't begin as a treasure hunter. He talks first about what made him quit his job to pursue this line of work. He goes on to explain how to determine if an artifact is genuine or if it's fool's gold. He describes some of the more interesting cases he's come across, describes the thrill of an auction, and explains the instinct, experience, and knowledge required to thrive in this business.

Raab also tackles dilemmas such as coming across an object that puts a historical figure in a bad light. The items that Raab finds often help tell a more complete story of the men and women of the past and helps bring a greater understanding to the events of the past. Not every historical item is valuable. Not every item will sell. Raab's must determine if he will be able to find an interested party to unload the historical wares on. After all, his ultimate goal is to make a profit. He must be careful though, because their is a huge market for forgery and theft.

I was enraptured as I listened to Fred Sanders, the narrator, read Raab's memoir. I enjoyed the personal stories about his finds, his near misses, and men baring cookies and cupcakes. A lot of what Raab does seems to combine gut instinct with a impeccable knowledge of history. Listening to this book was 8 almost 9 hours well spent. I definitely would recommend this book for history lovers. And I now know what I'm getting my dad for Father's Day.

So you may want to check out that old box that you've been storing in your attic or basement. You never know what valuable thing could be hiding at the bottom. Something that may unlock secrets of the past.