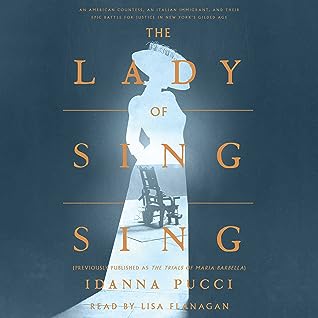 Previously published as The Trials of Maria Barbella. In 1895, a twenty-two-year-old Italian seamstress named Maria Barbella was accused of murdering her lover, Domenico Cataldo, after he seduced her and broke his promise to marry her. Following a sensational trial filled with inept lawyers, dishonest reporters and editors, and a crooked judge repaying political favors, the illiterate immigrant became the first woman sentenced to the newly invented electric chair at Sing Sing, where she is also the first female prisoner. Behind the scenes, a corporate war raged for the monopoly of electricity pitting two giants, Edison and Westinghouse with Nikola Tesla at his side, against each other.

Enter Cora Slocomb, an American-born Italian aristocrat and activist, who launched the first campaign against the death penalty to save Maria. Rallying the New York press, Cora reached out across the social divide—from the mansions of Fifth Avenue to the tenements of Little Italy. Maria’s “crime of honor” quickly becomes a cause celebre, seizing the nation’s attention. Idanna Pucci, Cora’s great-granddaughter, masterfully recounts this astonishing story by drawing on original research and documents from the US and Italy. This dramatic page-turner, interwoven with twists and unexpected turns, grapples with the tragedy of immigration, capital punishment, ethnic prejudice, criminal justice, corporate greed, violence against women, and a woman’s right to reject the role of victim. Over a century later, this story is as urgent as ever.

The Lady of Sing Sing by Idanna Pucci is a true crime story about Maria Barbella, an illiterate, twenty-two-year-old Italian immigrant, who was tried for murder for cutting her lover's throat in 1895. She was the first woman to be sentenced to death via the electric chair. Maria's case from the start had all the trappings that would make a fantastic political thriller: a crooked judge, inept lawyers, and corrupt reporters. But this isn't some blockbuster movie. It's real life. The travesties of this trial touch on so many issues still facing our country over a hundred years later. Immigration, capital punishment, prejudice, greed, feminism, and so much more.

Maria was seduced by Domenico Cataldo, who is probably rotting in hell as I type this review. After many promises of marriage, Domenico refused to honor his commitment. Maria cuts his throat. And while that seems like a cut and dry case, there is much much more to the story. Maria has a sham of a trial, but in this she is championed by Cora Slocomb and Ms. Rebecca Foster. Both women make it their mission to make sure Maria gets the justice that she deserves. They plead her case, raise funds, and they confront the injustices that Maria faces.

The Lady of Sing Sing is written by Cora Slocomb's great-granddaughter, Idanna Pucci and narrated by Lisa Flanagan. Lisa did an outstanding job narrating this book. I sat captivated not only by Pucci's' words, but also by Flanagan's ability to bring these words to life. I felt as if I were sitting in the court room with Maria. I had no idea who Maria Barbella was before I started reading this book, but I couldn't help but notice the similarities between her trial and some of today's social issues. We've come so far and yet we still have a ways to go. Our justice system is broken, and it has been for a long time. And poor Maria Barbella was a victim of this crooked system.