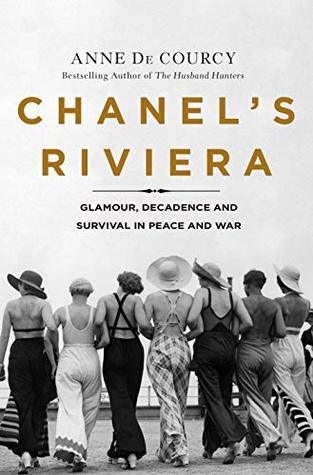 The Cote d’Azur in 1938 was a world of wealth, luxury, and extravagance, inhabited by a sparkling cast of characters including the Duke and Duchess of Windsor, Joseph P. Kennedy, Gloria Swanson, Colette, the Mitfords, Picasso, Cecil Beaton, and Somerset Maugham. The elite flocked to the Riviera each year to swim, gamble, and escape from the turbulence plaguing the rest of Europe. At the glittering center of it all was Coco Chanel, whose very presence at her magnificently appointed villa, La Pausa, made it the ultimate place to be. Born an orphan, her beauty and formidable intelligence allured many men, but it was her incredible talent, relentless work ethic, and exquisite taste that made her an icon.

But this wildly seductive world was poised on the edge of destruction. In a matter of months, the Nazis swooped down and the glamour of the pre-war parties and casinos gave way to the horrors of evacuation and the displacement of thousands of families during World War II. From the bitter struggle to survive emerged powerful stories of tragedy, sacrifice, and heroism.

Enriched by original research and de Courcy’s signature skill, Chanel’s Riviera brings the experiences of both rich and poor, protected and persecuted, to vivid life.

Chanel's Rivera turned out to be a Did Not Finish (DNF) for me. I so wanted to like this book. The glitz and glamor of the Rivera and the world of Coco Chanel just seemed too hard to resist. This book isn't a biography of Chanel, but more so of the Rivera and its history. The author makes no bones in telling her readers this first thing. So why didn't I like it?
First, let me say, I tried listening to this book on audio as well as read the kindle edition. Neither format worked for me.. Sophie Roberts is an excellent narrator. She did a great job narrating this book. The book is well researched, but it ended up being more like a gossip column, which distracts from the purpose of this book.
The Rivera was a place of refuge for many notable people including the Duke of Windsor and Wallis Simpson, Fitzgerald, Picasso, and of course, Coco Chanel. The wealth and privilege that seemed to cocoon the Rivera during wartime was a little off-putting. Not that that's the Rivera's fault. I just wasn't all that interested in the sex lives and scandals that seemed rampant among the Rivera's population.
And maybe that was my mistake. I was looking for substance but instead found trivial facts instead, making the "glamour and decadence" of the Rivera seem disappointing. This book was an okay read for me, but not a book I would recommend. There are some interesting details, especially when it came to wartime.
I made it about 3/4 of the way through the book before I decided to put it away. I wasn't enjoying it and there's just too many books I want to read to spend time on a book that I'm not crazy about. I really wanted to like this book, but alas, I didn't.