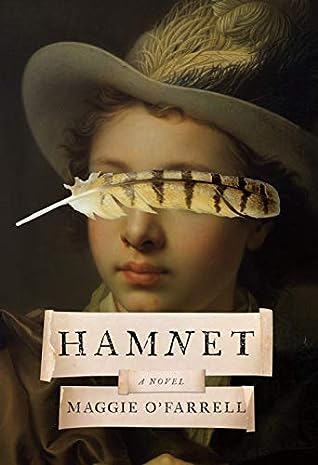 England, 1580. A young Latin tutor--penniless, bullied by a violent father--falls in love with an extraordinary, eccentric young woman: a wild creature who walks her family's estate with a falcon on her shoulder and is known throughout the countryside for her unusual gifts as a healer. Agnes understands plants and potions better than she does people, but once she settles with her husband on Henley Street in Stratford she becomes a fiercely protective mother and a steadfast, centrifugal force in the life of her young husband, whose gifts as a writer are just beginning to awaken when his beloved young son succumbs to bubonic plague.

A luminous portrait of a marriage, a shattering evocation of a family ravaged by grief and loss, and a hypnotic recreation of the story that inspired one of the greatest literary masterpieces of all time, Hamnet is mesmerizing and seductive, an impossible-to-put-down novel from one of our most gifted writers.

In Hamnet, Maggie O'Farrell re-imagines the short life of Hamnet Shakespeare which may or may not have influenced William Shakespeare's most famous tragedy, Hamlet. Not much is known about young Hamnet, other than the fact he was eleven years old when he died. Because there aren't many details, it may be a blessing and a curse to write such a novel.
The book begins with Hamnet and his twin sister. Judith, playing and avoiding chores. It isn't long before the audience senses something tragic is in the works. O'Farrell's writing is lyrical, instantly drawing her readers into the scene, and though I knew there were tough times ahead for the characters, I didn't wan't to put the book down.
Even though this book is called Hamnet, it's also about William Shakespeare and Anne Hathaway. The author describes Anne as a bit unearthly. She gives Anne abilities that reach beyond the normal human traits that most people possess. Perhaps O'Farrell was taking a page from Hamlet in her creation on Anne: "There are more things in heaven and earth, Horatio, Than are dreamt of in your philosophy."
I have read several books about Shakespeare, but not one dealing with the death of his son before. This book is emotional and devastating, but it's also beautifully written.The ending particularly had me choked up. O'Farrell did a marvelous job writing this historical fiction piece on not only a tough subject, but also in seeing a lesser known side of Shakespeare.
Hamnet historical fiction Maggie O'Farrell William Shakespeare